On its surface, the Batumi by XAOC Devices is a quad voltage controlled LFO module, but under the hood there’s a lot more going on. 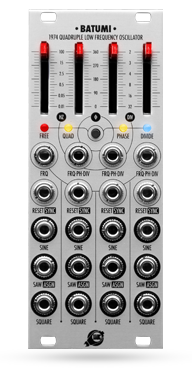 XAOC Devices (pronounced “Chaos”) are a eurorack module company based in Poland and one quick look at their company products page makes clear that they have a keen sense for design. With a clean, soviet flair and modules named after Eastern European locations, it’s easy to feel transported to that region while working with their creations. What may be less apparent at first is that their design sense seems to permeate past the superficial appearance of the panel and goes on to influence the creation of synth modules that are both simple and clever.

This can also be said about the Batumi. In free mode, the Batumi works pretty much as you would expect a bank of four VCLFOs to behave. In this case each one is independent of the others and the individual rate is set by a slider potentiometer that has an LED inside which glows on and off in accordance with the LFO’s output voltage. Voltage control can be achieved by patching into the FRQ input. The thing I miss most, however, is a lack of attenuators for these CV inputs. Advanced LFO users may want to keep a quad attenuator module beside the Batumi to compensate for this. Also included for each LFO is a reset/tap tempo input and three simultaneous wave outputs for sine, square, and a third assignable shape that can be easily modified by changing a pair of jumpers in the back or by buying a companion module called POTI which allows you to change the shape and reset function without having to remove the module each time. 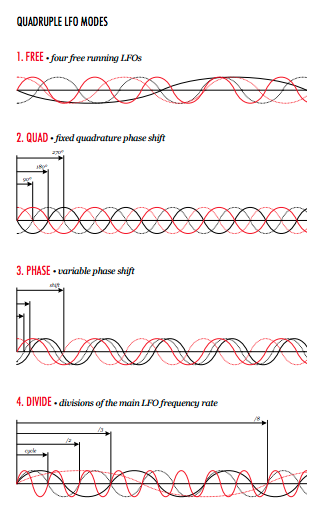 It is the three additional modes, however, which make the Batumi truly unique. Quad mode creates a fixed quadrature phase shift where the leftmost slider controls the master rate of all LFOs and each of the outputs are exactly 90 degrees shifted past the preceding one.

The Phase mode is similar to Quad mode except that each LFO’s phase value is arbitrary and can be set by using sliders 2 through 4 or by control voltage.

The final mode is an interesting mode called Divide where LFOs 2-4 are synced to LFO 1 like on the last two modes but the sliders now control a multiplication ratio of the master rate. For instance a slave LFO can be set to a rate that is 2 to 32 times slower than the master.

Personally, a favorite thing to do is patch out of one LFO into the frequency input of another. In this way you can create a chain of two or more LFOs to create a highly complex voltage source.

Learn more about it at the Batumi product page: http://xaocdevices.com/main/batumi/