Have you ever wondered why you need to plug your turntable into a special input on your receiver? Or why K-Mix has “phono” and “line” options for inputs 3-8? Or why you can’t just plug it into a pair of powered speakers, start enjoying your old records and call it a day? Maybe you’ve recently finished recording an album and wonder why you need to have it specially mastered for vinyl production. The answer to these questions lies in the special standardized system of frequency pre-emphasis and de-emphasis known as RIAA equalization.

When a record is mastered for vinyl, the lower frequencies are cut and the high frequencies are boosted according to a standardized system- the RIAA curve. Upon playback, however, the inverse curve is applied so that the resultant sound coming from the speaker has a flat frequency response and sounds as it’s meant to. The standardization of this practice is important, as any mismatch between the recording and playback would result in the sound being incorrectly reproduced, and so it was decided in the mid-fifties that the RIAA curve be the de facto universal standard.

If you’re curious, or a visual learner, the RIAA curve looks like this: 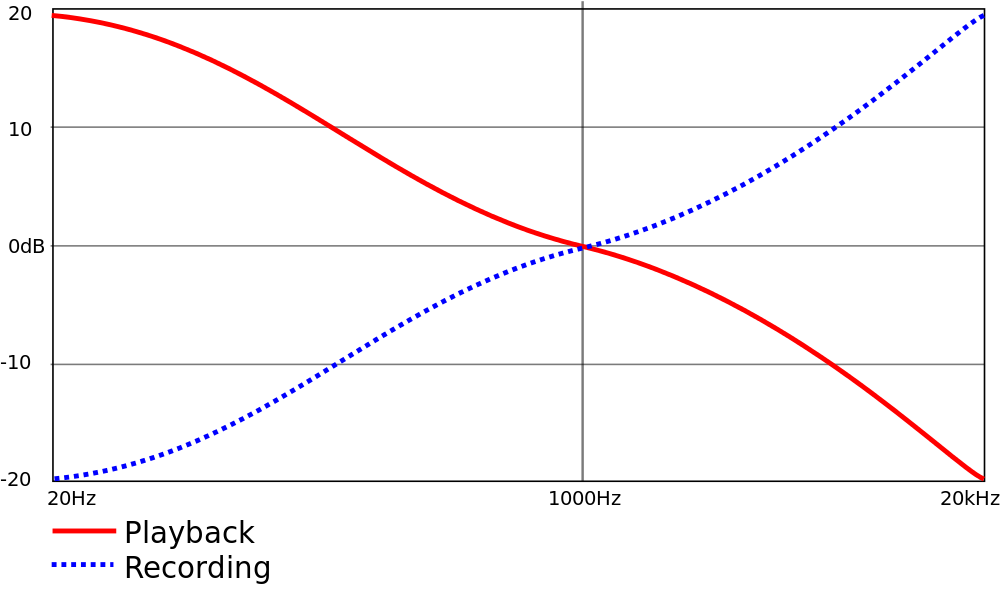 You may be wondering why anyone would bother to apply this process to the recording in the first place. If the resultant sound is the same as the recorded sound why mess with it? Well, it turns out there are a few excellent reasons for doing so.

We all love bass; that feeling that kicks you in the chest or rattles the license plate of a passing lowrider. But the same mechanical power that your neighbors absolutely love is a terror to your record needle. The application of the RIAA curve reins in those bass frequencies that threaten to jump the groove and damage your needle so that you can get the bass you want without ruining your equipment.

The pre-emphasis and de-emphasis of the RIAA curve as it applies to the treble frequencies of the spectrum also serve to improve the quality of the sound. Specifically, it helps to reduce the amount of surface noise that is amplified when playing the record. Hiss, crackles, pops and dust bunnies are all muted as the high frequencies are rolled off.

An added benefit to using the RIAA curve is that it drastically narrows the width of the grooves. If the grooves are smaller you can fit more of them onto the record, and the longer the groove on the record the more you can fit on each side.

FUN FACT: If you took the grooves of a record, uncoiled them and laid them out straight they would extend about 500M or roughly 1/3 of a mile. Per side. That means for every record you play the needle travels 1000M or 2/3 of a mile. Wow! [Please remember to treat your needles well and retire them when they wear out (every 500 or so miles).]

How did we figure this out? How does it work? Because MATH! and also Google. Here’s a link to a forum where a guest poster spins a story about calculating the length of the groove and here’s a link explaining how to calculate the length of an Archimedean Spiral.

Anticipating that K-Mix would be hooked up to a wide range of devices to service a great variety of needs, we added a phono switch to channels 3-8 so that you can enable the RIAA curve and have your records playing through your K-Mix without any other pre-amplification. It’s easy to do, just open up the K-Mix editor, navigate to “preferences” in the K-Mix Editor menu, and you can toggle between phono and line for channels 3-8. Check it out:

Cool! So that’s more or less the deal with RIAA equalization. I hope you learned something new! Now go out there, enjoy your records, and forget any of this ever happened.