Thinking in Parallel: Live Effect Racks for Utility and Creativity

Let’s talk about Effect Racks in Ableton Live. If you’re a seasoned user, I’m sure that you know about racks, and if you are a relative rookie, you should get to know them, and know them WELL. Arguably one of Live’s most powerful tools for both setting up creative effects and crafting useful utilities that can be used time and time again.

In this first installment we will examine recreating a complex effect by building it from smaller pieces. These pieces will be native Live devices, and one Max 4 Live device. Max 4 Live is now included in Live 9, so if you’re up to date you should have access to all the devices we will be using. I use a Mac for my computer music, so key commands will be referenced using Mac lingo. I will try to also include the Windows equivalent when I can, but don’t hate me if I forget.

A few months ago I was watching a video for a new VST effect that was meant to recreate the effect of Automatic Double Tracking.

A recording technique that was meant to emulate the effect of two very similar performances layered on top of each to achieve a richer and wider sound. It’s a similar effect to that of a flanger and phaser, but I thought it would be interesting to try and mimic an ADT effect based on the parts used in the analogue recording process. Luckily for me, Live has the tools to do that.

The original technique used two tape machines that are slightly out of sync to replicate this, so at it’s most basic level it’s two identical signals with one offset in time by a very small amount. To mimic this in Live we will use an Effect Racks to process two (and more) streams of audio.

You can find the ending device HERE.

We will be more or less building that up step by step below. Hopefully by following along you get a larger grasp of how flexible racks are for processing audio.

First drag an empty Effects rack from Live’s browser onto an audio or midi track. To get our first ‘tape machine’, click on the second button on the left side of the audio effect rack to expose the chains section. Ctrl + click (right click on PC) in the area that tells you to drop an audio effect and select ‘Create Chain’. Call this chain ‘Original’, this will be our original, dry signal. To get our second tape machine, create another chain and call it ‘Double’, then drag a Simple Delay onto the chain from the browser, link the channels, set the delay mode to time, set the feedback to 0% and the dry/wet to 100%.

This is the basic principle of ADT, one audio stream mixed with a copy of that stream slightly offset in time. You can adjust the delay time (preferably something low like 5 -10 ms) to hear the effect on the audio. Now, you might be thinking “This is all well and good, but I could’ve just done this with a Simple Delay and the dry/wet knob”. That is true, but we aren’t nearly done with this yet. The plugin that inspired this experiment had the option of enabling another tape head, so why don’t we go ahead and do that.

Instead of adding another chain in parallel to our original and double streams, let’s create the third tape head inside of the Double rack to allow us to process those two streams together, but independently of the original. Ctrl+click on the delays title bar and select ‘Group’ (or cmd+G, ctrl+G on windows) then duplicate our chain (cmd+D on Mac, ctrl+D on Windows). Now we have our two playheads that can be offset independently from each other, but what next? There’s a plethora of options, and I have decided to employ some randomness and modulation to make our ADT have a little bit of life, as well as dropping an EQ in front of the delays so we can remove pesky low frequencies that are more susceptible to phasing and can really start to muddy things up.

First drag an EQ 8 from the browser (you could use an EQ3, but I almost exclusively use EQ8 because, well, it’s better) in front of our double rack. 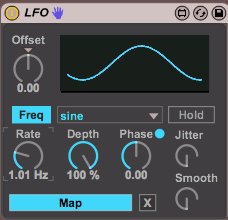 Dial up a highpass filter and now we can remove any low frequencies from entering our delayed audio streams. To address the modulation, I’ve turned to the Max 4 Live LFO device. Drag an LFO behind each of the delays, click on the MAP button and then click on the delay time. By default this modulation will be far too extreme to be of any use to us, so we will need to really back off the rate, and depth parameters. Let’s start with something like a rate of .02 Hz, and a depth of .01%. Our delay time is now modulating, but the delay is much too long. Dial the offset back to something like -.098. Now our delay is modulating between about 2 and 5 ms. This is what we are looking for, some subtle movement.

I am a huge fan of randomness especially in subtle ways. The LFO device has a parameter called ‘Jitter’ that introduces randomness around the LFO, dialing this up can remove the cyclical nature of most phasers/flangers/modulated delay type effects. Pairing this with the Smooth parameter can introduce very subtle random modulations that are perfect for imitating the ‘wow’ and ‘flutter’ characteristics of analog machines. 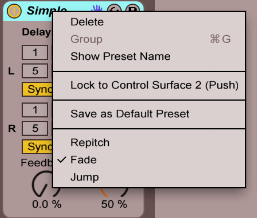 To truly imitate a tape style delay we need to have the pitch of the delayed material to be affected by the time delay. There is a nice option in the delays in Live (Simple ,Ping-Pong and Filter Delay) that allows you to change how the delay responds to changes in the delay time. Ctrl+click on the delays title bar, and at the bottom of the contextual menu will be options for ‘Jump’, ‘Fade’, and ‘Repitch’. Setting this to repitch will emulate a tape-style delay. This will introduce pitch modulation as well as time modulation.

Ok, so this is starting to sound pretty good to my ears, but there are some other tweaks I want to make to the signal routing. I thought it might be interesting to process the right and left channels

independently as well. To do this, we will drop a Utility effect in front of the delays, and set them to just pass the right and left channel respectively. Then set the panning if the channels to mirror what channels they are receiving. You could also set up the chains to just process the mid or side of the signal using the width parameter (0% = mid 200% = side).

Now that we’ve built our little ADT clone, it’s time to Macro things up and make easy adjusting possible. I’m not going to walk through this, but you can see how I chose to do things by looking at the example device linked to earlier in the article. Some things that should be at the top level would be level adjustments for the original and copies, and the cutoff of the highpass filter before the copies. You could also add a width parameter to control the stereo spread of the copies. It’s a good idea to keep parameters in a useful range, for instance the offset, and depth parameters. For this particular device the useful range is quite small, so keeping the values within that range will make the device easy to use for yourself as well as others if you choose to share it.

Although this will sound similar to a chorusing effect the beauty is that we have exposed all the points in the signal chain for further processing and manipulation. You could compress just the original, and add reverb to the copies to give a sense of depth and space. Really the possibilities are endless. Use your imagination to create some wild effects, or just use the device as is to thicken up Vocals or Instruments.