Back in the 1960s, it didn’t take synth maker pioneers like Moog and Buchla very long to realize the fun and usefulness of modules that could step through patterns of programmed voltage values. They are called sequencers and they are simple devices with powerful implications.

Long before music was made on personal computers, before trackers and DAWs, electronic music existed in the analog domain. To many people in that era, being able to tell a synthesizer to perform a repeating sequence of notes seemed like magic, but even 50 years later, sequenced synthesizers have yet to lose their appeal. 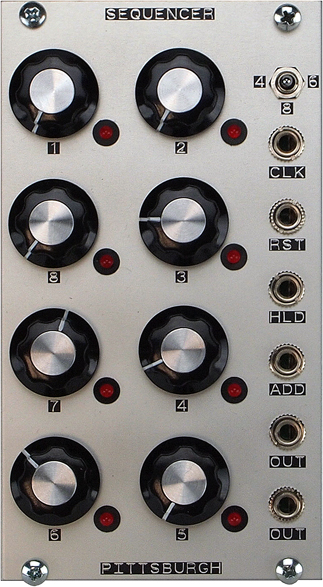 There’s no reason why you need to have a constant rate going into your clock input. Patch the gate output of your CV keyboard into the sequencer’s clock input and each time you press a key you’ll move the sequencer position forward one step. You also don’t need to sequence only pitch, you can patch from your sequencer output into any CV input such as filter cutoff frequency or VCA.

Generally the voltages snap immediately to the next value, but it can be very musical to add a ‘slew’ module after your sequencer to create a slide between values. Slew modules generally have an input and an output, as well as a knob which controls how fast or slow the slide is.

There are also more advanced sequencers which have additional steps, adjustable numbers of steps, gate outputs, the ability to turn off steps (rests) and more.

In the following video about the Medic Modules EKG sequencer you can see a trick where the clock input comes from the square wave output of a normal oscillator instead of an LFO. This much faster signal allows a sequencer to act as a variable wave shape oscillator. Watch the video to see what I mean: