At it’s best, electronic music can stimulate, energize, or hypnotize the conscious state of the the listener. To do that you’re going to need a few additional tools, or modules, to help shape your sound source into something that is more interesting and expressive.

In Part 1 of Simple Synthesis you learned how to combine VCOs, VCAs, Control Voltage and Gate signals to create a simple keyboard patch. But no keyboard patch is truly complete without at least one Envelope Generator (EG). Envelope Generators, also called Transient or Contour Generators, are circuits that, when triggered, produce a contoured signal over time. Often used to control volume, EG’s can give a natural or unnatural character to a played note by giving the synthesist control over how fast the volume rises from silence to full volume, also known as the Attack Phase as well as how long it takes for the sound to fade out after a key is released, also known as the Release Phase. These parameters enable you to determine whether your notes will sound like a click with a fast attack and a fast release, a percussive sound with a fast attack and a slower release, or a sound that fades in with a long attack. You will often find EG’s with more phases such as the classic ‘Attack, Decay, Sustain, Release’ paradigm. 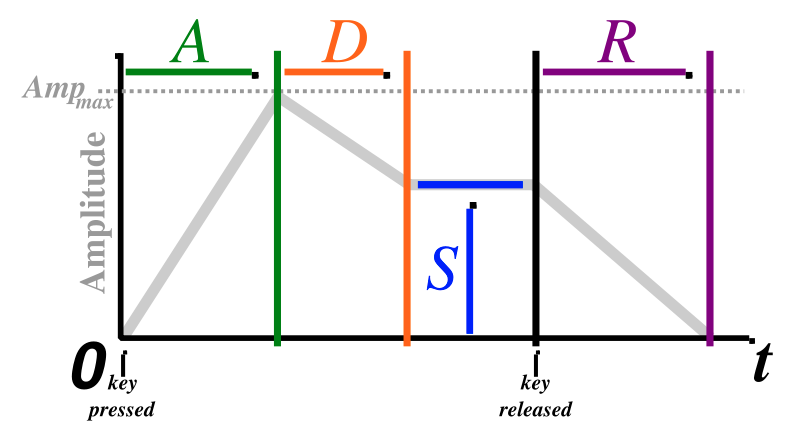 To add this capability to our existing basic keyboard patch we’ll need to modulate the VCA with an Envelope Generator. First, patch the gate output of your keyboard into the EG’s gate input, this will trigger the voltage envelope each time you hit a key. Next patch from the EG’s output into the VCA’s CV input. Now when you hit a key you will hear articulated and dynamic notes according to your Envelope Generator settings.

Envelope Generators aren’t just for VCAs though, they can work on anything, including VCO pitch and filter cutoff frequency.