How do you sync two sequencers to the same master clock while both run at different speeds? How do you generate a sub octave? In the this entry into the Simple Synthesis series you will learn about some of the various uses for gate and trigger signals, as well as a very important tool for manipulating them.

The gate signal just described is the behavior of the CV output of a CV keyboard, but an even more common gate signal is present in most modular rigs- the LFO and VCO square wave outputs. An LFO’s square wave output is often the master clock of a modular system, which all sequencers rely upon in order to continue moving from one step to the next. But what if you want a second sequencer to run at half the rate of the first? Meet the clock divider, also known as a pulse divider.

When a clock divider receives a stream of gate pulses at its input it will only pass a fraction of the pulses on to its output. For instance, from the 1/2 output pulses will be sent half as often, skipping every other pulse. From the 1/4 output 1 pulse will be sent for every 4 pulses that arrive at the input.

One application for a clock divider includes having one sequencer generating a fast note sequence while a second sequencer runs at 1/8th the speed that transposes the first sequence. Another application is for triggering drum modules, such as kick, snare, and hat modules. An LFO’s square wave output into a clock divider is all you need for a very basic drum sequencer, try the following: 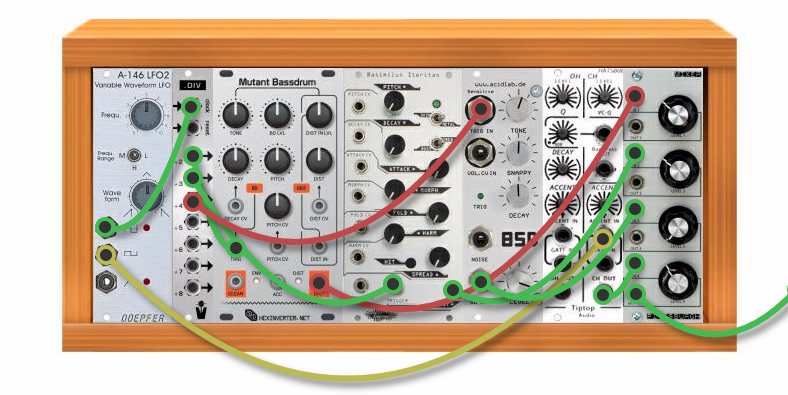 Another function of a clock divider is that of a subharmonic generator. Patch from the pulse wave output of an oscillator into the clock divider’s input and the 1/2 output will give you a square wave with the frequency that is one octave below. The 1/4 output will be two octaves below, etc. When these sub outputs are mixed with the original signal it can really fatten up your sound.

Thanks for reading my final entry to the Simple Synthesis series, we’ll wrap up with a video by Tuesday Night Machines of a clock divider being used as a subharmonic generator. This is Emmett Corman, signing off.