A crossfader is exactly what you expect to find on any DJ mixer. It has an input on the left, an input on the right, and a fader is used to mix between them. In the modular world it’s more likely to be a knob than a fader, but its function is still the same. But synth module designers didn’t stop there; they went on to make the crossfader’s position voltage controllable, opening up its applications in surprising ways.

It’s best to first examine what happens during a full sweep of the crossfader.

To create a basic patch with a crossfader module, such as an Intellijel uFade, patch any two oscillator outputs into the left and right inputs and patch out of an LFO into the XFADE CV input while monitoring the mix output. With the LFO set to a slow setting turn the CV attenuator clockwise to hear the LFO slowly modulate the crossfader back and forth. Turn the attenuator full right to get a full sweep. Something strange is about to happen, so pay attention. As you gradually increase the rate of the LFO you will start to get to a point where you hear a warbling – increase it even more, going into VCO speed territory, and you’ll begin to hear sidebands similar to ring modulation.

The reason for the added harmonics is because when the crossfade happens at audio rate, you are effectively creating a new wave type. Below is a diagram which shows what happens when you patch triangle and sawtooth waveform types into the audio inputs of a crossfader and modulate the crossfade position with a square wave that is running at the same frequency. The second case is what happens when you shift the square wave up one octave. 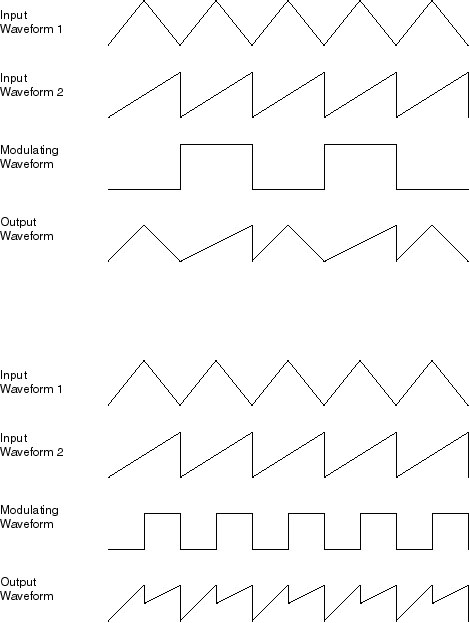 As you can see by examining the output waveform, using audio rate crossfading can result in unique wave types. If the modulating oscillator were detuned from the other oscillator outputs then the resulting waveform would be different from one cycle to the next, creating complex and evolving sounds.

To see some of the power of crossfading, check out the following demo of the uFade by Intellijel: