When an LFO is routed to modulate an oscillator’s pitch, the result is known as vibrato. Speed that LFO up to audio rate and you’ve got what’s called Frequency Modulation Synthesis, or FM for short. Although used in digital synths like the Yamaha DX7 since the 1980’s, FM synthesis has been a part of modular technique ever since the creation of VCOs.

The simplest example of FM synthesis is when one oscillator modulates the frequency of another. Try it out:

* Patch from VCO 2’s sine wave output into your speakers.

By now you will have noticed a space-age sound, but you’ve only just scratched the surface of FM’s potential. In 1983, Yamaha Corporation came out with the DX7, the first digital FM synthesizer. Although it was confusing to program, it offered a new sound that exploded throughout the 80s and changed the music of the decade considerably. It had 6 operators, which were actually 6 oscillators, each with its own volume envelope that could be patched together in a very flexible way. In the simple patch above you only used two oscillators, so you still have a long way to go before you reach the complexity of Yamaha’s 30-year-old synthesizer. The reason sound designers like more oscillators when designing FM sounds is because it increases the complexity. With three oscillators you can now have a third VCO modulating the modulator to create a chain. After playing with different pitches for the modulators and different level amounts, the resulting behavior can be very hard to predict. Also the resulting sound is often dissonant unless the modulators are even multiplications or fractions of the carrier frequency.

In modular synthesizers, a VCO’s pitch CV inputs are exponential because it expects the volt-per-octave scale that is output from sequencers and CV keyboards. When it comes to FM synthesis, however, the exponential inputs will cause the oscillators to have different pitch ratios depending on which key is pressed. To solve this problem, many VCO’s have a linear FM input that is best for sounds that need to be similar regardless of the CV source’s pitch.

The best way to get a feel for FM is by experimenting with it. To make a three oscillator FM keyboard patch make the following connections:

* From the Pitch CV output of a CV Keyboard such as a QuNexus into the V/Oct input of VCOs 1, 2, and 3 – You may need a mult or stackable cables to duplicate the signal

* From the EG output into the VCA’s CV input

* From the VCA output into your speakers 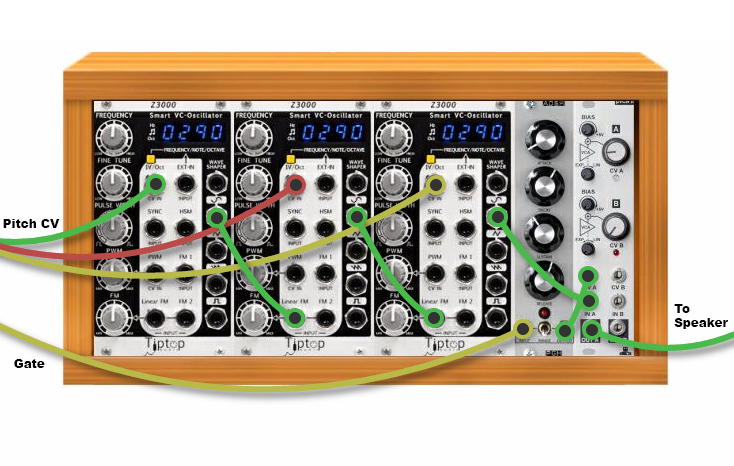 Now play around with different VCO frequency settings and adjust the Linear FM attenuator knobs. You can create a feedback loop by patching from one of VCO 3’s outputs back into the Linear FM input on VCO 1. There’s no rule that says you can only use sine waves with FM, so try combining different wave types and see what happens.

Watch the following video by inside synthesis to hear FM synthesis in action.