Looping in Live with SoftStep: Session Mode and Clips

Live Looping comes in many different flavors and can be approached from many different angles. Within the context of Ableton Live, the intrepid performer can explore a plethora of looping techniques to find the one that best suits their goals. You can use Session View to leverage the power of clips to capture ideas. You can use the built-in Looper device to layer musical phrases. Each of these approaches (and ones that I haven’t mentioned) has distinct advantages and features that the others lack. Of course, if none of the approaches satisfy you, you can build your own. As an instrumentalist, it’s important to have some hands free control of these techniques. The SoftStep is a nice choice that is flexible enough to assist us in accomplishing all of these approaches. In this series we will examine using the SS to approach Live Looping in a few different ways.

Let’s first talk about using a tool that’s been part of Live since ver 1.0: the Session View. In Session View your tracks (or loopers in this case) are laid out horizontally, and your musical ideas are laid out vertically. You can record into as many ‘loopers’ as you want, and can record as many clips as your session can hold. This allows you to build up complex arrangements on the fly, and you’ll always be able to go back and find that one great idea that came out of the jam. Some of the disadvantages of this are that there is no overdubbing and the navigation and control can get tricky without some planning. If you want to overdub you’ll have to use another track. This can quickly lead to a messy looping situation when you start to increase the number of tracks.

All you will need for the most basic setup is three audio tracks and your SoftStep with the factory preset NOTES loaded up (Basic or Advanced Editor will work fine here). Less is more when using your feet to control things, so for the first example let’s stick to three loops. Once you have your three audio tracks, we can go ahead and use Live’s MIDI mapping to get control of the session from the Softstep. First, we’ll want a way to arm the tracks and trigger recording. Once you enter MIDI mapping mode (cmd + m on Mac, ctrl + m on Windows) you should map the record arm buttons of each of the tracks to buttons on your SS. Let’s use 6, 7 and 8 for this. Simply click the interface element you wish to map in Live and then hit the desired button on the SS. 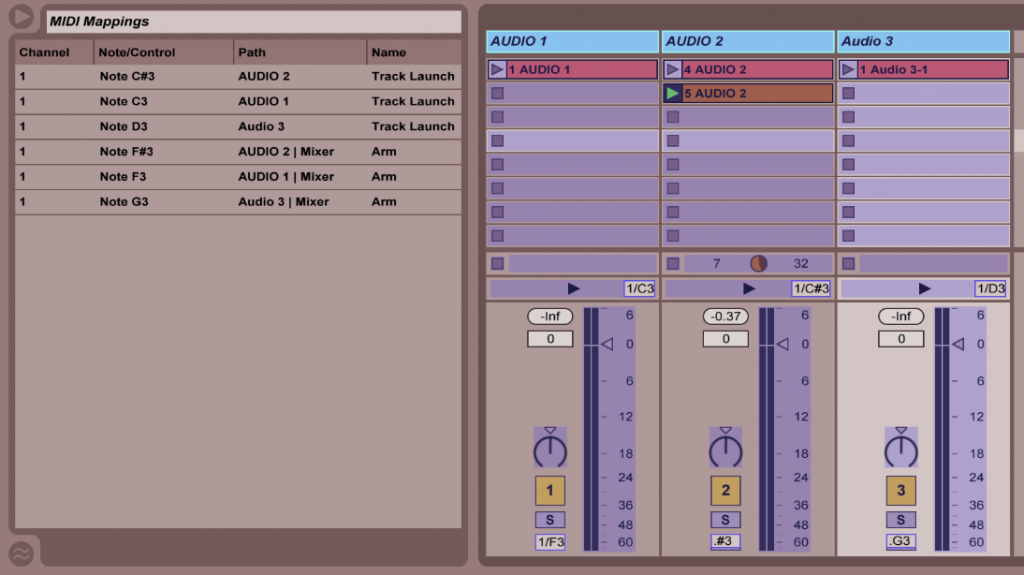 After doing that for the record arm buttons, also map the Track Launch Buttons to buttons 1, 2 and 3 on the SoftStep. Your MIDI mapping should look like the above screenshot. Now you can give looping a shot. Once you arm a track with one of the upper buttons, hit the corresponding button in the lower of the SS to begin recording a clip at your session’s defined Clip Quantization (this setting is found in the upper left, next to the metronome).

Now we can arm three tracks and record clips into the selected scene. We will need a way to move the selected scene. Luckily, Live has some kind-of-hidden buttons to get that done. If you enter MIDI mapping mode again and look on the Master track, below the scene list, you’ll see a collection of small buttons, like the picture to the right. The two arrow buttons will scroll the selected scene up and down and the triangle gives us the ability to launch the entire scene. Along with the scene stop button above, we have all the controls we need for a very basic Looping setup!

One thing to consider is that you won’t hear any input unless you have a track record armed and a clip isn’t playing. One way around this is to create an ‘Input Track’ and to set that track as the input to the three Looper tracks. Set all of the Looper tracks’ monitoring to OFF and set the Input track’s monitoring to IN.

This allows you to always hear the instrument coming into Live. You can also add some processing on the input to track to record into the Loopers. There is lots of flexibility in effects with a setup like this.

In the next article we will set up a very similar looping set, but, instead of using clips in Session Mode, we will use Live’s built-in Looper device.