A native Texan who now resides in Seattle, Trey Gunn is known mostly for the unusual touch guitar that he plays. With this instrument under his fingers he has participated in a constant stream of cutting edges projects from King Crimson to TOOL. We caught up with Trey to talk about his current musical projects, his rig, and his work in multidisciplinary creative coaching with students ranging from musicians to painters to competitive coffee brewers. 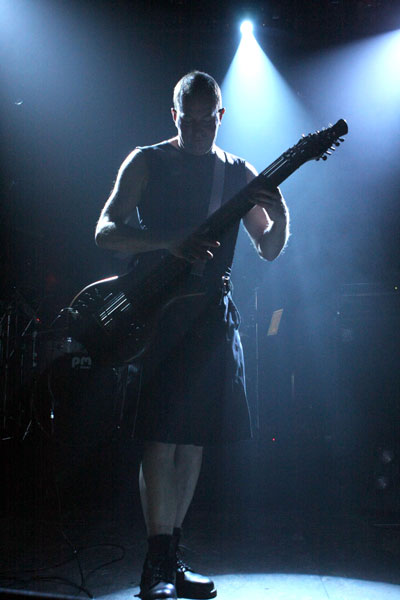 For starters, can you tell us who you are and what you do?
Trey Gunn, musician. My main instrument is an extended ranging tapping guitar known as a “touch guitar.” The touch guitar that I play is a Warr Guitar, made by Mark Warr. I have been playing versions of this kind of instrument for almost 30 years now.

I have done a whole lot of different kinds of musical projects over the years. Bands (King Crimson, etc…), sessions, recording and productions of my own and for others, composing for film and TV. I run my own record label and I coach musicians (and artists) in the creative process.

On your website, where you talk about the process of coaching people through the creative process, you say that your students include a broad range of creatives from musicians to painters to competitive coffee brewers. What’s the common thread there?
Great question. I work with people in whatever way they need. Assuming that I can actually offer some help and insight. So, in theory, there would be no commonality, as every person’s needs are quite different. However, it turns out there is a common thread. And that is when you have artists, of any discipline, heading into the unknown- meaning their aims are to go somewhere where there is no roadmap or manual- then they are going to be bumping into a lot of confusion, trepidation, fatigue and downright terror. That may sound overly dramatic, but it isn’t. Once you leave the marked roads of working within a given genre, your work quickly becomes deep for yourself. Every single note/word/paintbrush stroke is filled with extra meaning. Meaning that your whole being stands inside of. And every strategy that you work with represents the deepest part of yourself. So when you get stuck, it is a direct confrontation with who and what you are. All of my coaching clients are working deeply in these ways.

What I tend to do with folks is to radically tear apart their strategies and help them find news ways of working that truly serve their aims. The problem with trying to make something new is that we tend to head in new directions but with the strategies that we used for re-creating old musics. And this won’t work. Those old strategies gravitate back to the place where there came from. This is exactly why having an experienced coach can be essential. A teacher generally teaches you their own strategies. But a deep coach can see new strategies inside your specific aims and lure those out. Even strategies that are in conflict with the way I would choose to work.

While I do have a few “regular” clients who are here to learn specific skills, most of my folks are shooting off into the unknown.

What musical projects are getting the bulk of your time and attention these days?
I have…hmmm…maybe four or five main projects. Of course, that many projects means nothing is that “main”! I tend to traverse a lot of musical territory and that means keeping a lot of balls in the air.

3Below — a trio of bass instruments with Michael Manring and Alonso Arreola
TU — a heavy improvised and electronic duo with drummer Pat Mastelotto
KTU — a trio with Mastelotto and Finnish accordionist Kimmo Pohjonen
The Security Project — a five piece with drummer Jerry Marotta, re-envisioning Peter Gabriel’s material from 1980-84
Solo performances — with the Warr Guitar and an acoustic-electric baritone ukulele

Most all of these projects are live shows. I tend to perform with each of them from one to three times a year somewhere on the planet. The latest gig was KTU in Montenegro.

What’s your current performance rig like?
I seem to be on a perpetual search for the world’s smallest, and most powerful, rig. And I am, now, closer than ever before. Because none of my current touring work involves having any road crew, and I have to haul all of my gear myself, I want to be able to get on an airplane with everything I need and have minimal excess baggage charges. And, of course, I want to be able to have all of my sounds with me.

So, I have two versions of my live rig. Version 1 is for most all of my live work. Version 2 is what I use when I need to be running Ableton Live as well. This is for my solo shows and for my solo segments in the 3Below show.

Version 2, everything above plus:
Mac laptop running Albeton Live
RME UCX half-rack firewire interface
2 KMI Softsteps (one to control the Fractal, the other to control Ableton)

The Fractal Axe has great depth to its MIDI implementation. How are you using it with the SoftStep?
Yeah, the Fractal is super deep. I had been avoiding carrying any kind of rack gear for years. But when I tried this thing out, I had to convert immediately. Not only does it sound great, the real-time expression control is ridiculously open-ended. Plus I can process both sides of my instrument at the same time with different effects modules. Perfect for a guy like me. I use the Softstep to change presets, but I also use it to help with all the real-time expressions that I play with. The first is that I have the EH-Microsynth on an effects loop in the back of the Fractal and I use the Softstep to crossfade it in and out in real-time. Then I have many patches with a sequences of delays setup so that I can throw a single note (via the Softstep control) into a infinite delay or reverb and continue to solo over the top of it. And, then, finally I have several pitch-shifting or crazy fuzz patches that I control in real-time with the Softstep.

When I use version 2 of the rig, with the laptop, I have the second Softstep controlling all sorts of things inside of Ableton Live. Play, stop, record clips, channel volumes, etc. These Softsteps are incredible and I have it down where I can program the thing with ease. Plus having two of them on the road means that each one is a backup of the other.

What’s been inspiring you lately?
Musically? I am super inspired by African and Afro-Carribean rhythms. I try to spend some part of each day practicing various rhythms on my hand drums. Things from Haiti and Cuba and pieces that I learned when traveling in Mali. For some strange reason I am very much drawn to music from Benin, on the west coast of Africa. Both their traditional music and an odd kind of funk that was going on there during the 1970s. It is extremely groovy and greasy music.

Any plans for the future?
More of everything. I just released a cd that is part of a 4 cd group of compositions. So I am working on the second disc at the moment.

and watch this video of the Trey Gunn Band playing live: