Sonic Boom was a founding member of Spacemen 3 who went on to release solo material under the monikers Spectrum and E.A.R. More recently he has worked with Panda Bear on the releases Tomboy and Panda Bear vs. The Grim Reaper. We caught up with Sonic Boom to talk about collaborating on projects, the state of modern electronic music, and some of his favorite vintage analogue synthesizers. 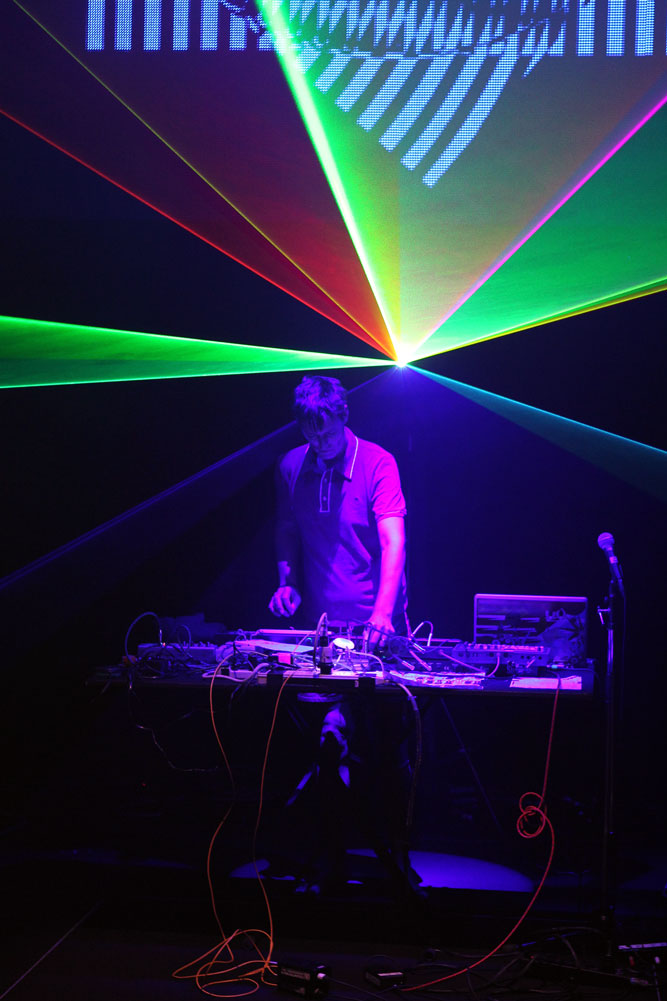 For starters, can you tell us who you are and what it is you do?

Panda Bear vs. The Grim Reaper is the second album you’ve worked on with Panda Bear, how did you two start working together?

I first heard his stuff at a friends birthday when the Person Pitch LP came out. I bought the record and really loved it and started to backtrack. I noticed on the inner sleeve that he’d thanked maybe 100 bands and artistes that he felt were influential to him- including Spacemen 3 – so I emailed him to say I loved his all records I could find and if he was interested I’d be jazzed to do some shows or maybe a collaboration. So we started a general convo about music and collaborating and stuff and that eventually led to him asking if I would help him out mixing Tomboy for LP release. The Grim Reaper LP sort of followed the same process. I think there was a point where Noah thought I’d be a useful adjunct and 2nd opinion (working solo in a vacuum of self-questioning is always a tough place to inhabit). He certainly knows it’s my favourite thing to work on his stuff; he has a real generosity in collaboration that I think bears him good results. Knowing he’s kind of chill and easy going puts more pressure in a weird way to deserve it (that’s all in me and not his intention). I know we both have high aims, and even if we don’t always reach them, the fact that we ARE reaching is really important to me. It’s only occasionally I feel fully 200% aligned with who I’m working with, that extra level where you’re coming from slightly different perspectives and disciplines, and I’ve always felt that with Panda Bear. I always joke to him, “it’s the hardest… but the best.” We definitely set a hard task for ourselves and challenge our technological abilities, as well as musical ones, to the max . The chance to see “what if…????” and reap the results. 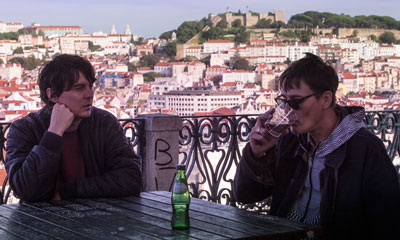 The album sounds great, can you tell us a bit about the gear you used in the studio?

We were recording at an old radio studio in Lisbon, Portugal called ‘Namouche’ (Bullseye). The studio had one of those massive Neve desks and all the side-cars loaded with dozens of tone Equalizers’s, recording Pre-Amps and Limiters. They also had a bunch of instruments & pairs of the 3 or 4 best Neumann mics. We also took a choice selection of our own ‘weapons of choice’ including a Moog Voyager, an EMS Synthi AKS, a Fenix modular, and some favourite special effects like the Moog MuRF, some Earthquaker Devices harmonizer pedals, and different types of ambience processors- a Boss RRV-10 which I’ve used on and off since Spacemen 3, and the Boss Tera Echo- again, a new type of ambience processor that gives very squeezed sounding effects, kind of a special watery cross between a warped reverb and delay . In general we wanted to try to find new answers to old problems…

The last few years have seen analogue synthesis- particularly modular synthesis and eurorack systems- enjoying a surge in popularity. You’ve been at this game a long time, any thoughts on the state of music technology today?

Music technology is at the place I guess I always dreamed it would be… A host of new, original and useful designs, effects and modular stuff. I bemoan the lack of fixed format systems that give the user a formidable array of possibilities in a wide number of scenarios (like the EMS Synthi or the Fenix synths) but in reality it’s obvious that more expandable, customizable and affordable (at least in stages) systems will have a great appeal; Korg releasing a host of cheap but analogue devices (including the MS-20 mini they reissued) and the general selection of stuff from old and new manufacturers alike is all really healthy .

Lately we’re seeing alot of companies releasing new versions of their classic synths. If you could pick a discontinued synth to be re-released which would you choose?

Can I pick three? or four?

1st – Electronic Dream Plants Wasp –
It was one of the first digi/log hybrids in it’s day. It usually came in a cheap plastic case (which was a serious weakness ) and every expense was spared in the general manufacturing and physical design. The massive sound and elegant simplicity of it’s components, however, make it an obvious contender. It’s oscillator was digitally generated and controlled, making it popular as an affordable, reliable tuning source in its late 70’s life, and EDP had many unique and forward thinking concepts – including a core midi digital control bus system.

2nd – The EMS Synthi –
The first portable synthesizer ever (semi) mass produced. These are made still in very small numbers by EMS- the longest running continuous synth production ever- but due mostly to problems with cost and supply of certain components. With a small redesign it could be manufactured affordably, I don’t know any instrument that is so versatile in it’s applications and so well designed and powerful as a study in limited resources. Peter Zinovieff, the inventor and musician responsible for the design, is something of a genius and this product has never really been superseded .

3rd – Synton Fenix –
I was very lucky to find out about this Dutch company called Synton, whose ex employees had undertaken to make a subscription only modular synthesizer. They did that twice . Each time they set out to make instruments of high musicality, giving as many useful options as possible. The instruments were built in Holland and provided a powerful compact system where the quality of sound was tantamount. The project was a largely philanthropic thing, with their prime interest being the provision of great instruments for themselves, their contemporaries, and anyone able to put their money down. The numbers made were between 100 and 200 only. I see there’s recently been much talk about the amazing sound of a new Aphex Twin track named for the Fenix synths that he owns… 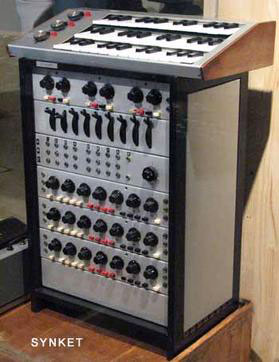 4th – Synket Synthesizer –
There was an early valve modular system made in Italy by the American designer Paul Ketoff called the Synket in 1964. Valve electronics often have a beautifully electric sound & I’d like to see a valve modular. Something with dangerous amounts of power running thru its veins.

Any plans for the near future? What’s next for Sonic Boom?

I guess loosely I’m continuing to pursue the production and mastering side of things. I’m 50 this year, so I’m trying to cut down traveling for touring to a sensible level. Production-wise I like the collaborative process a lot, and what it can get. And I enjoy trying to bring my experience and knowledge to help people achieve the best possible recordings and try to expand or tune-in the parameters of what they do with their songs and music in a considered way. 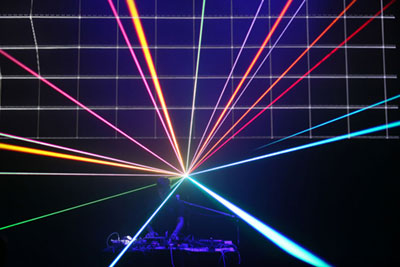 What’s inspiring to you these days?

I’m inspired by projects where small manufacturers are making seriously next stage products. There’s a company called PATCH BLOCKS who- through a Kickstarter project- have released a $50 box that can be loaded with audio or control patches of your own design using a simple visual modular programming interface. They’re 12 bit, too, which gives an interesting and fairly unique stamp to the patches. The units can be linked digitally by clipping them together to make expanded systems or run individually. It gives the ability to affordably programme your own custom synths, sequencers, and effects.
There’s a company called Kilpatrick Audio , who again thru a Kickstarter campaign are marketing a compact fixed format synth with some nice features at a very affordable price . The Phenol sells for around $800 & comes with an internal sequencer as well as midi to cv converter .The design is fairly flexible too & it appears to be well suited to people wanting to get a useful amount of the main synthesis blocks , in the banana format – which is the system I use with my Fenixes , Serge & Analog Computer logic elements which all ‘speak’ the same voltages .
Plug-in wise ? I use Uhbik plug-in effects a lot. They’re an example of how the best manufactures- even individuals- can provide the sort of features and nomenclature which I used to bemoan lacking in most equipment, but also continue to innovate and design useful features. Thankfully gone are the days when people mistakenly referred to tremolo as vibrato, or phasing as flanging, et cetera, et cetera. Finally most manufacturers realize that we all want to use the same terms for and we want things like modulations to be defined in meaningful terms.
It also excites me that people now can look back over a century of electronics and say, “Yes, that was a viable strain. Let’s get rolling from where they were at.”

How did you find out about Keith McMillen Instruments?

I’m always looking at good, affordable ways to mix up MIDI & CV ”conversation”, and I like a lot of what MIDI and general control information can offer. I’ve been slowly trying to build a system in my studio with total plasticity of control, where I can cross-pollinate between all the internal elements of sounds and musical information to interrelate them all in music with the ability of highly interdependent reaction -whether using midi or control voltage . Music, for me, and sound processing in particular, is always something I had a real interest in and things have never been so stimulating………

Watch a video of Sonic Boom / Spectrum playing a live show in Paris: