Olivier Gillet of Mutable Instruments took time the answer some of our questions about his beginnings and inspirations, and to share some tips for getting started in modular synthesis.

My time is spent between catching up with research in audio DSP, thinking about module concepts, designing circuit boards, writing code (for the digital modules), playing with prototypes and analyzing feedback I get from the musicians who test them, shipping stuff to dealers, and the occasional repairs or administrative duties. It’s a lot of work, but there’s so much variety in it that I never get bored!

What inspired you to start making synths and DIY kits? Why did you discontinue those instruments?

This all started in 2009. I had been making electronic music for about 10 years, I had a bunch of analog synths, but was getting less and less inspired and hadn’t recorded a track in years. I wanted to learn electronics and was looking for a project that would motivate me, so I thought, what about building a MIDI synth? This looked like a good topic to approach various aspects of analog and digital electronics – good intuition! – and this could get me excited again about releasing music again – bad intuition, making synths sucked all my time! 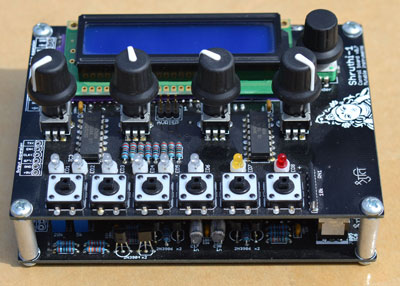 I created this first synth, the Shruti-1, just for myself, shared sounds and pictures, and it turned out people badly wanted one! At the time my knowledge of electronics was very fresh and limited, this was just a hobby, so my idea was just to sell the parts and boards, make it a kit, so people could solder it on their kitchen table just like I did. The demand kept growing, I progressively refined the design to make it easier to build and use easier to find parts, registered a company for tax reasons, and it became a business! My first kit was quite a success, I was not confident yet in my skills in electronics to have stuff mass-manufactured, so I kept on churning synths of increasing complexity: a 6-voice polysynth, Ambika, a monosynth with an all analog signal path, Anushri – all as DIY kits, with hundreds to thousands of parts.

In 2013 I started selling my first non-DIY mass-manufactured products, which were Eurorack modules. And it suddenly made the DIY business look very dreadful. The DIY kits were very limited technologically because they had to be simple enough to be built by hand – so I had to squeeze a lot out of very outdated microcontrollers for example, and everything was compromises. Selling a DIY kit felt like selling broken products: I was spending a ridiculous amount of time answering emails and forum posts from people who did not manage to assemble them correctly – and this kept happening all the time as my user base grew from DIY geeks to beginners who just liked the sound. As a business, DIY was tough – people want DIY kits to be cheap, while a kit requires as much engineering as, and more support than assembled products
(whose assembly can now largely automated by the way, unlike stuffing parts in zipper bags).

More generally, there was a transition in my way of thinking and appreciation. When I started making synths, my idea of what a synth was came from Roland or Ensoniq keyboards – 2 oscillators mixed into a filter, LFOs and ADSR envelopes… Getting into modulars made me realize how much bigger the world of synthesis was, and I started asking myself questions like “do we really need filters?” or “are there ways of making sounds evolve that do not look like ADSR envelopes or a three-waveform LFO?”, and it occurred to me that I had questioned too few assumptions in the process of making my first DIY creations. I was not very proud of the conservative vision of synthesis they embodied. Even in terms of design, there was not the
same sense of coherence as within the Eurorack line. Now I’m kind of embarrassed by these DIY beasts.

How did you get into Eurorack modules? What do you like about the format?

I bought a basic Doepfer system in 2012, originally to be used as “musically calibrated test equipment” to test my circuits, and I got instantly hooked.

I like the Eurorack format primarily because of its audience: I think its users are at the forefront of experimentation, and there is an interesting feedback loop between manufacturers and users of this format – pushing many new ideas forward. People expect, and will embrace, novel ideas. What I also like with Eurorack is that it is neutral in terms of sound and aesthetics – anything is possible. If I were doing 5U for example, my modules would have to be black with bakelite knobs, and their sound would have to mesh well with classic analog Moog sounds – I would feel limited by that. It would be even harder to make something that fits well in a Buchla system – they are a world in themselves.

Interestingly, I am not so happy with the technical aspects of the Eurorack format itself – I would have preferred slightly larger panels, banana jacks, standardized panel sizes (half, single, double width… say 8, 16 and 32 HP), an internal 3.3V supply… Closer to the Kilpatrick format.

Your modules are all very interesting takes on classic themes, what inspires them?

The main process is thinking in terms of “activities” or “processes” the musician would like to achieve, and then try to come up with parameters/dimensions the musician could control. I also like to mathematically abstract an existing synthesis technique – find new parameters, or new ways of controlling its parameters. It’s why some of my modules do not really fit pre existing categories, or why there are knobs that influence different parameters behind the scenes. But in terms of design process, a bunch of other things are going on at once… Scratching my own itches… Trying to fill “gaps” in the line to reach the goal of a full Mutable Instruments system… Finding good uses of little code/algorithmic nuggets I found when implementing ideas found in research papers… Trying not to leave too many unused CPU power/gates unused in the modules… Staying not too close from what other manufacturers are doing… Or just doing something very different from what I had been doing over the past 6 months!

Many of your modules have fun little Easter Eggs hidden in their functionality, where did you get the idea to include them? How do you decide what to hide?

Sometimes I have ideas that I deem not worthy of being turned into a module – because they are one trick ponies, because I don’t get the same “wow” from them as I get from the modules I’ve released so far, or because I find out, after having written the code, that another module from another brand does more or less the same thing. All these are candidates for the easter eggs! I usually decide what to do depending on the number of knobs, CV inputs, etc. available on the module.

Any tips for a beginner looking to get into creating their first modular synth system?

If you come from the world of analog synths, don’t make the mistake of trying to replicate a classic synth architecture with two VCOs, a mixer, a filter, 2 ADSRs, etc. You’ll end up with a monosynth not very pleasant to use, and you won’t be in the right mindset to “unlearn” what you know about synthesis. The goal is to find out that there is much more to synthesis than this architecture!

Don’t spend hours on Modular Grid trying to plan a fully filled system. I recommend you to let your frustrations drive your planning, and you won’t know what you miss before you play your system for hours. That’s why I would recommend a beginner to have at least as much empty space as modules in their first system.

If you don’t know how to start, just do this:
* 1 sound source (oscillator, sample player…)
* 1 modifier (filter, wavefolder, effect processor…)
* 1 modulation source that can do both looping and one-shot modulations
* Optionally, one control module – allowing you to “play” the modules
(MIDI/CV interface or sequencer). This might no longer be necessary,
with so much gear these days having CV/Gate outputs!

Then try to make the most of it, identify your frustrations, and then expand one module at a time in the direction pointed by your limitations. Every time you add a module in your system it’s like learning a new instrument… take baby steps.

While it’s tempting to try to get all the modules from a single brand, I think you should stay open-minded and sample 3-4 brands when you start.

Any advice for more advanced synthesists looking to start their own module company?

You’ll probably have to start alone or with a very small team, thus it’s important to cover as many skills as possible – hardware, software, graphical design, without having to require external talent. You won’t be a “startup” because there’s no potential for explosive
growth – you’ll have to be lean and super scrappy, and do a lot by yourself.

It might not be as easy as you think. For me, it can take as little as 2 months between having a module idea, and having a functional board with an aluminium panel doing everything planned – something that could be mistaken for the final product. But the actual release will be 10 or 12 months later. Why is it so? Polishing, testing, dealing with manufacturing issues, part shortages, analysis of defective units from pre-production runs, documentation and packaging… So don’t reveal too early what you’re doing, and be very careful with the ETAs you give. When you think it’s done you’re usually at 25% of the road!

If you’re considering crowdfunding, first go through the process of making something cheap and dumb (say a run of 50 simple modules) on your own money, so that you at least have an idea of what’s ahead of you.

While you’re known for your hardware, you’ve programmed software in the past. What was the idea behind the creation of CycliC? Do you have any plans for other softwares?

Actually, I’m not the author of CycliC!

While I was developing the sequencer for Ambika (the DIY synth), I came across an interesting bug in which two tracks of the sequencer were actually reading the same sequence, but with a different length and start point. It sounded very Steve Reich-ish – and I thought it would be a good principle to create rich polyphonic sequences: define a single large sequence that would set the overall key, and then get many simultaneous players to go through fragments of it at various speeds, skipping notes etc. It’s actually what Terry Riley’s “in C” is too!

Since I don’t like writing software for Mac / PC / mobile, and since the idea was way too complex for being turned into a hardware product, I passed it along to Dan Nigrin, known for several esoteric sequencers (software clones of the M-185 and Klee hardware sequencers). He’s the guy who developed CyliC.

I like writing embedded software, for my own boards; but don’t like the perishable, disposable aspect of plug-ins or mobile apps.

Is there anything new coming out that you’d like to talk about?

I’ve had so many funny surprises in manufacturing that I now avoid announcing things too early!

Check out all of the Mutable Instruments gear on their website: http://mutable-instruments.net/