Nick Reinhart is a guitarist and effects wizard who plays in the genre-defying band Tera Melos, the equally frenetic duo Bygones with Zach Hill, the super-group Big Walnuts Yonder with Mike Watt, Nels Cline and Greg Saunier, and contributed to the Jenny Death half of Death Grips’ album The Powers That B.  I caught up with Nick to talk about the electronic music inspiration for his sound, his process with effects pedals, the inception of Big Walnuts Yonder, The Simpsons universe, and the reality-challenging aesthetic of Windy City Heat.

My name is Nick Reinhart. I play guitar in a band called Tera Melos (tare-uh melloh-s) and lots of other projects. I suppose my variety of playing would fall under the “experimental” category. I use a lot of effects to get non-traditional sounds out of the guitar. 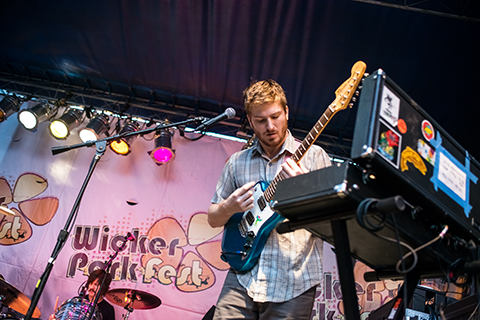 Your mastery over and heavy use of effects transcends the normal behavior of an electric guitar to the point that it approaches a fully electronic music instrument. How did you arrive at this sound? What was the process?

I started playing guitar when I was 11 and was interested in effect pedals from the beginning. I started with a really basic fuzz pedal and around 12 years old I messed around with a delay pedal that had 2 second looping capabilities. That was really exciting for me. I slowly started collecting pedals and experimenting with different combinations. At some point in my early 20s a friend gave me a DigiTech synth pedal that he thought was fairly useless. It made a few sounds that were very non-guitar sounding. I applied it to a few ideas and that was sort of the beginning of approaching guitar sounds/playing from a different perspective.

Considering all the electronics and effects you use, what inspiration do you take from electronic musicians?

I’d say the approach is largely based off my love for computer-based music. In 9th grade I was really into punk and Nirvana and all that. Then my friend Bob showed me Aphex Twin, Squarepusher and Underworld. That was a big turning point for me. Then, when I was 18ish, I started messing with DAWs/software like fruity loops and reason. I really liked all the sounds I could make on a computer and discovered that I could emulate some of those ideas on guitar with the right effects. I also realized that some of the stuff I’d write on a computer would be much too fast to play on a guitar with a pick, so that’s when I started developing my two handed tapping stuff. So electronic music was sonically and physically inspiring.

It looked like you had a blast at NAMM demoing all the Earthquaker Devices pedals and you’ve been contributing to Juan Alderete’s pedal review site. How did you get started doing this type of work?

Well Tera Melos has been a band for 10+ years now and we’ve been really into guitar effects since our first show. There weren’t too many bands then that had massive, absurd pedal boards. Well, actually, Mars Volta did! Haha. I’ve seen photos of Juan surrounded by three giant boards. Anyways, it wasn’t until the last few years that I got acknowledged as someone that was really into sound manipulation. I think it probably started by hanging out with Juan, actually. I think we met back in 2009 and became friendly. Before he was doing pedalsandeffects.com he and I and Jonathan Hischke had sometimes joked about doing a TV show that was centered on nerding out over pedals. Eventually that turned into a real idea and Juan started his site. We’d talked about getting me in there to run through my entire pedal board; at that point there had been a fair amount of info floating around the internet about what my set up was, but a lot of my gear was either decorated or broken, so there was a lot of misinformation as well. It was really dorky because I had a bit of a inner conflict about whether or not I wanted to explicitly state how all my pedals were being used/modded/chained together. It kind of went back to the Aphex Twin/Squarepusher/Underworld influence- there wasn’t a whole lot of information about how those guys were creating that music and playing it live. In a lot of ways I respected the mystery behind it. Of course I would love a step-by-step, detailed look at what Richard D. James is doing at any given moment in a studio or on a stage, but I like the wonder and magic behind it. I eventually decided it’d be pretty cool to just go hang out with Juan and talk pedals, so one time when I was passing through LA we spent an afternoon filming a walkthrough of whatever my current set up was at the time. That was kind of the big spike for pedal-related people knowing who I was. Since then I’ve worked with a lot of pedal companies doing various things. It’s actually one of the craziest things to ever happen to me.

How do you go about deciding what is on your pedalboard at any moment? Does it change?

It definitely depends on the project/music and what purpose I’m trying to serve. With my main group, Tera Melos, I like to have lots of options at my feet- different overdrives, modulated sounds, synths, looping devices, etc. Half of the boards will generally be my “must haves,” and then the other half will be colorful things that I can drop in at any point. When I’m doing something in a more improvised setting I usually like to have a little more color than necessary. I have this concept for a band in my head where I’m using LOTS of different fuzz/overdrive/distortion pedals. I think that’d be interesting- finding different combinations of sonically abrasive pedals that sound awesome together. But yea, it changes all the time. Even with tera melos- I don’t think there’s been a tour where I had even 50% of the same stuff down there from the last tour.

Tell me about the new project Big Walnuts Yonder, how did that come about?

Tera Melos is friends with Mike Watt. We’ve toured with him a bit and run into him in different countries on different continents. Around 4 years ago we were playing a show with him and The Missingmen in Ireland. We were backstage and I was asking Mike about his second opera, Contemplating the Engine Room. I really love Nels Cline’s guitar playing on that record. Some might classify his playing as the “fire emoji.” There’s a song called “The Boilerman” that I was asking Watt about in particular. He told me, “if you wanna know about Nels then you gotta play with him!” and then we talked about doing a band with the three of us. He told me to find a drummer- one that I’d never played with. I knew immediately that Greg Saunier from Deerhoof would add a dimension to that sort of project that no one else could. So Mike emailed Nels and I emailed greg. Everyone was way on board. Mike wrote basslines and sent them to me. That was strange because I’d never written guitar parts to pre-existing bass parts. It was massively challenging in the best way. We sent the demos to Nels and Greg, though I’m not sure that they really listened to them. Maybe just enough to get the vibe. Anyways, it took 3 years to get everyone in a room at the same time. trying to line up those 4 schedules was almost impossible. We recorded all the music in 3 days with Tony Maimone, from Pere Ubu, manning the board. We would jam the parts for a bit so Nels and Greg could get some neat stuff figured out, then we’d hit record. It was great. The record is almost done. It sounds really, really cool. I’m excited for everyone to hear it. Playing with those guys was something else. I learned a lot from it. Hopefully we can line everyone’s schedules up to play some shows.

What are some tour essentials when you’re out on the road?

Definitely an iPod. I recently left mine on a plane. It was an iPod Classic. They don’t make those anymore and now people are selling them for way too much money, so that’s a bummer. What else- back ups and plan B’s because things are gonna break and go wrong. I’ve usually got extra patch cables, velcro, fuses, memory cards, amp, guitar, etc, etc.

What’ve you been most excited about lately?

Trying to finish some solo music that’s largely electronic based, but I’ve been excited about that for years. I always find myself coming back to it and saying, “Yea, but this can be better.” But I think I’ve got it pretty cool sounding right now. 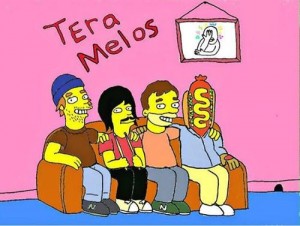 Besides being perhaps the greatest television show of all time, what’s the best part about The Simpsons?

I just really love the Simpsons’ universe and the infinite possibilities that come with animation, and obviously the writers and animators take full advantage of that. The aesthetic and colors are all really neat and captivating. I feel like The Simpsons represent my imagination and Curb Your Enthusiasm represents my reality.

Any other thoughts or ideas you’d like to talk about?

Yes. I’d like to educate the readers about a movie very dear to my heart called “Windy City Heat.” There are these 3 friends: Perry, Don and Mole. Don and Mole have been f*cking with Perry for over 20 years (10 years at the time the movie was made). In those 20 years they created a false reality surrounding Perry. Perry is very naive and believes just about everything that he is told. It’s like a real life Truman Show. They lead him to believe that he has been cast as the lead role in a movie. Windy City Heat is the behind the scenes making of the fake movie. It’s 100% real and amazing and the movie itself is just scratching the surface. It goes way deeper than what we are shown. There are bonus scenes from WCH of Perry watching the completed movie for the first time, and that leads to more questions, the obvious being- does he understand that it was all a massive prank? The answer to that is a very complicated one. They’ve continued the project with a podcast and other various things. I’ve met a couple people involved with the project and it’s insane how real it is. You can watch the whole thing on YouTube, which you should do right now!