Luke Saunders is a professional touring musician who’s been on the road with Daughter and Shura.  We asked him a few questions about how he got started, what life’s like on the road, and what inspires him.

For starters, can you tell us who you are and what it is you do?
Hey, my name’s Luke and I’m a 23 year old London based multi-instrumentalist. I moved from France to England four years ago to study and pursue a career in music. 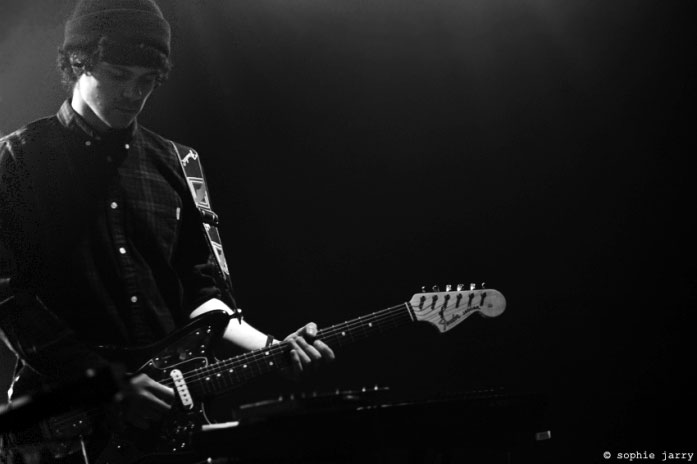 You were picked up to tour with Daughter as part of the live act, how did you get involved with them?
We all studied at the same school in London, we kind of knew of each other but had never properly met. At the time where Daughter were finishing their debut album they were looking for a 4th member to expand their live set and through a mutual friend of ours, we got introduced. I attended a few rehearsals, from then everything just clicked and a month later we were on the road together. It certainly has been an incredible experience.

More recently you’ve been working with Shura, what’s your role in that band?
My role with Shura is very much of multi tasking, the studio recordings are very intricate and there’s three of us on stage so we have to find ways of giving out the best rendition of the songs we can. Throughout the set I’m combining guitar, bass, keyboards and I also do quite a lot of sample triggering thanks to a Quneo and 12 step.

What’s a typical day in the life of a touring musician? Is there such a thing?
I guess there is and there isn’t, ultimately most days are spent travelling and waiting to perform on stage. It’s interesting because regardless of where you are touring, everyday can potentially end up feeling the same. There’s a routine in place but on the other hand each day can be so unique and special in it’s own way. I think embracing any unknown element is what keeps things fresh, like getting lost in a city you don’t know and not knowing your way back, or doing your absolute best but never knowing if a show will be a success or not. The possibility for failure always has to be there, it feels like that’s where great memories stem from.

Do you have any tips for young players interested in touring with bands?
Music is a very human thing and I think finding a scene you feel comfortable in is key. Being a capable musician is obviously important but feeling connected with the people you tour with is invaluable. I think you have to accept you might not be right for every project and that’s fine, because ultimately working with who feels right will only make you love what you do even more.

Any exciting plans for the near future?
Definitely getting very excited to leave for SXSW with Shura, it should be a great few weeks. We also have a busy summer of festivals ahead so yeah, really looking forward to it all.

What’s inspiring you these days?
A combination of things, mostly all relating to being a better musician haha. I’m really enjoying starting to write and produce music for myself and some of my close friends. As a consequence I spend a lot of time reading and watching interviews of some of my favourite producers and I’m obsessed with knowing how they achieve a certain sound. Learning is such a great feeling and I’m fortunate enough to be around people I learn from everyday.