We interviewed Kassa Overall about his thoughts on music and his work on the Colbert Show.

For starters, who are you and what do you do?


My name is Kassa Overall, and I do whatever I want to do. I am most respected as a jazz drummer. I played with many of the living greats in the jazz lineage, and I am friends with the rest. I am quite well known in some worlds as an underground rapper. But in reality, and many people aren’t aware of this yet, I may be one of the greatest music producers breathing air today.

Sounds prolific. How did you get started down this road to greatness?

I don’t know, I guess it’s just all I really ever did consistently. My living room was like a musical instruments playground growing up. I would just get lost in messing around with instruments and recording my voice and stuff like that. We also had a Mattel Synsonic which I remember learning how to sequence with literally as a toddler. Wow, fun memories!

So you were exposed to drumming, music performance, and music technology all at the same time? Do you think of them as separate now or has it always been this way?

It started out all as one thing. It was literally playing with toys as a kid, but as I became socialized and started to notice that there were cultural separations pertaining to genre and generation, I naturally separated things. For example, the drum set became my medium for studying “jazz.” It was what felt like serious practice. I played in the jazz ensemble in middle school. It was kind of looked at as nerdy; predominately white kids made up the band. It was the music of the past to most people. I would make beats and write raps with my friends outside of school: that wasn’t nerdy at all. Rap music was the centerpiece of everything that we thought we needed as adolescents, and we could create that in my basement. Everyone in my circle thought they could rap or tell me how the beat should go, and to a certain degree they could. It was folk music. By definition it was the music of the people of that time expressing what was happening then or what we wanted out of life. For some stupid reason I never mixed the two. Can you imagine a drum set upstairs and a home studio downstairs and some kind of psychological hang up stopping you from putting two and two together? I am still coming out of that block to this day, honestly. That separation is magnified by people who want music to be a certain way, and for labels to be static and unchanging.

How do you break down that block? How do you want music to be?

But seriously, a lot of the defining terms we use will not be applicable generations down the road. The art we create will be repurposed and therefore redefined for the context of its time, similarly to how we reutilize art from earlier times.

I don’t know how I want music to be, I just want to feel uninhibited by preconceived notions when I make it.

Yeah, you seem like many things. What’s next? What do you have lined up?

I am most excited about this new album I’m literally working on as we speak. It is essentially me bringing my drum set downstairs and mixing my worlds together. I am finding ways to blend jazz, rap and production together to make some totally fresh and new sounding soundscapes. it sounds cliche at this point to say you are making hip hop with jazz influence or vice versa, but that is not what this is. this isn’t take some jazz chords and add a hip hop beat to it. that is too easy and already been done. but there is so nuch more available in the genre categories. there are production techniques that come from rap that have nothing to do with the thpe of beat that is being played. same with jazz. there are textures that have nothing to do with the type of chord. so i am having a blast applying everything i know without restraint. as soon as i stopped thinking about who would like it or what it was being made for, the whole world opened up. i have this ballad fraturing jon batiste that is retarded. working on mixing that now. i don’t want to say too much but i hope to make a lot of strides over the next few months. 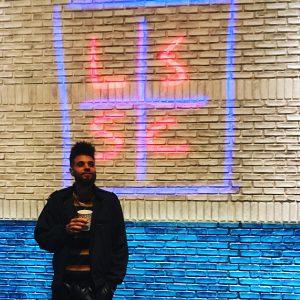 What is your role on The Colbert Show? Would you call it ‘Hype Man’? or something else?

DJ/ Hype Man, all around electronics guy. So I do some effected vocals, percussion. I make loops for certain songs, remake classic grooves, etc. Cowbell.

Sounds like fun, how did you land that gig?

I have collaborated with Jon Batiste on various projects throughout the last 10 years living in New York.

On a spiritual note, I was getting out of an Uber in San Francisco and thought to myself, “I need to call Jon and check in.” As soon as I had that thought I heard someone say “Kassss Oooonnne” (Kass One, a nickname). It was Jon Batiste. So we caught the same flight back to NY and hung out. Soon after I got him to come to the studio and get on a song. He saw the vibes I was working with and the focus I exuded and asked me to come be on the show.

Right place, right time, and putting yourself out there?

Partially, but more importantly peep the coincidence that occurred where he popped in my head and then was right there in real life after the thought. There is energy and spirit involved in a lot of the decisions I make, and if one is sensitive enough to peep the signs you will know the turns to make.

Sounds pretty visionary. Hey, thanks for your time!