Joe Gore is a guitar polymath. An ardent character with a curriculum vitae that spans everything from guitar blogger to Editor of Guitar Player magazine, album credits with Tom Waits to touring with PJ Harvey, consultant work with Apple to unique boutique effects pedal designer, and more such stretches of experience than could comfortably be listed here. We caught up with Joe to talk about the analog and digital nature of guitars, their present and their future, and what he’s found inspiring lately. 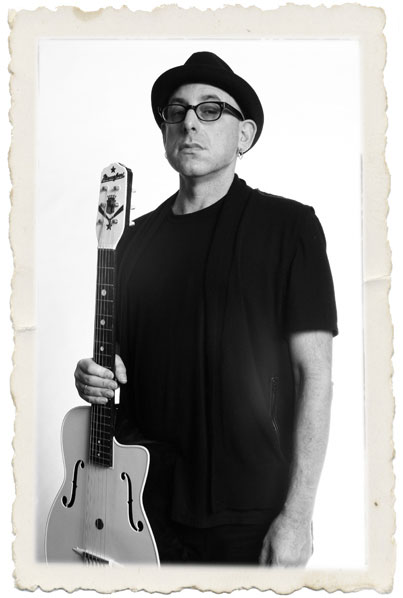 For starters, tell us who you are and what you do.
My name is Joe Gore, and I make my living playing music, writing and editing articles about music, and developing music products. I’ve worked with Tom Waits, PJ Harvey, Tracy Chapman, Marianne Faithfull, the Eels, DJ Shadow, and many other artists. I’ve composed for movies, TV, and corporate clients. I’ve toiled as an editor for both Guitar Player and (these days) Premier Guitar, and I’ve contributed to many other music mags as well. My instrument-instrument clients include Apple, Yamaha, Fishman — and KMI! I’ve also just launched a line of analog guitar pedals, sold through Vintage King.

Can you take us on a quick tour of your rig?
There are always at least two! I increasingly view analog and digital electric guitar as separate instruments. On the analog side, I use mostly guitar, pedals, and amps I’ve made myself. These days I veer away from using pedalboards in favor of devising ad hoc signal chains to suit the situation at hand. Fave gear that I didn’t make includes my Trussart Steelcaster, an old Gibson Trini Lopez, a ’63 Strat, a Carr Skylark amp, and a lovely brownface Fender Tremolux. My favorite acoustic guitars are a 1941 Martin 00-17 steel-string and the Alvarez classical guitar I learned on as a teen, but tuned extra-low and strung with bizarre “rope core” strings for a hybrid nylon/steel-string effect.
On the digital side, however, I use a fixed setup: My guitar is a sort of hybrid Firebird/Jazzmaster made from Warmoth parts and filled with weird custom electronics, plus a Fishman TriplePlay MIDI pickup. I play through a Universal Audio Twin interface into a MacBook Pro running Apple’s MainStage software. Processed guitar and MIDI sounds exit the computer via the UA Twin, feeding a hardware Boomerang III looper, and then the house system and/or a pair of Fishman Loudbox amps. The brains of the operation is my KMI SoftStep 2, which I use to step through MainStage “scenes,” toggle effects on and off, and control varying parameters on a patch-by-patch basis. For years I was frustrated by the lack of modern, stage-worthy, USB-based control surfaces for guitarists. I embraced SoftStep the instant it appeared, and I still use it every day.

Do you have any tips for looping guitar performance?
Enough tips to bore everyone to tears! I recently tried to sum up most of what I’ve learned about looping in a single Premier Guitar article (“A Live Looping Lesson,” Nov. 2014). Much of it focuses on ways to bust out of predictable looping patterns. For example, looping makes it easy to weave beautiful sonic tapestries, layering parts one at a time. That’s a great thing—but the problem with looping performances is that every piece can fall into an identical slow-build structure. I offer suggestions for things that aren’t so idiomatic to looping, like creating hard stops and starts, or dramatic contrasts between sections.

You’ve done consultation work for Apple’s Logic, GarageBand and Main Stage, and you have a line of effects pedals you tweaked and designed yourself. Given that you have a foot in each camp, what’s your take on analog vs. digital? Where’s the happy medium?
I wish I could find more of a happy medium! But as mentioned, the two styles have become separate instruments for me. In some ways, that’s liberating. It makes it easier to approach digital sound creation without analog preconceptions, ignoring the drawbacks of the technology and highlighting the advantages. Conversely, it’s inclined me toward greater simplicity on the analog side. That’s especially true of the pedals I make, most of which are extremely simple and retro. I don’t build clones of old gear, however. Yeah, I often borrow from vintage circuits, but I tend to veer off into “road not taken” directions, or mix and match technology from different eras. Perhaps it’s a stompbox equivalent of “alternate history” fantasy and sci-fi.Basically, I make stuff I wish someone else had made.
BTW, I’m not claiming my tendency to view analog and digital guitar as separate instruments is preferable, or even desirable—I like the idea of a more holistic approach! But I just seem to get less hung up on limitations and more inspired by possibilities when I separate the two approaches in my mind.

Do you have any predictions for the future of guitar?
If you’d asked me a year or two ago, I’d have ventured bold predictions, at least on the tech front. But at this point, none of what I thought would happen seems to be occurring. For example, I’ve considered digital stompboxes and amp modelers that reside outside the computer to be evolutionary dead ends. Sure, some of them sound great, but why would you want to create sounds via a clunky stompbox interface? Granted, bringing a computer onstage is a nightmare in many regards, but once you’ve gotten in the habit of creating sounds with a powerful processor and a full-screen UI, how can you stand to fiddle with little knobs and inscrutable LED screens? Creating sounds with chains of digital pedals is like building with prefab blocks, while working within the open environment of a computer OS is more like molding your own blocks from clay. But contrary to my predictions, standalone digital effects and processors are more popular than ever. Also, until recently I’d have assumed that Apple’s OS X and iOS were on a collision course, and that we’d soon be making music on touch-screen interfaces with the power of the fastest computers. Now I’m not so sure. (Believe me, my past work for Apple gives me no special insight into the company’s long-term plans. I pull predictions out of my butt, just like the next guy.)
I suspect there will be parallel interest in creating sounds on portable digital devices, and eschewing digital in favor of a retro, all-analog experience. Which is one lame-ass, wishy-washy prediction!
On the stylistic front, guitar music will ebb and flow in coolness, as it always does. I suspect the instrument will never regain the cultural primacy it enjoyed a few decades ago, but human ingenuity is infinite, and someone will always be doing something new and bitchin’ on the instrument. Guitar’s greatest strength may be the fact that almost anyone can learn to play. That means the door is always open to innovation, customization, and just plain weird shit. If guitar ever becomes totally boring, it will be our fault, not the instrument’s.

What’s been inspiring you lately?
My favorite musicians are Claude Debussy and Duke Ellington. I learn new things every time I listen or study scores, and my respect for their genius and love of their music only grows deeper over time. And whenever I find myself searching for inspiration, I revisit “crisis points” in music history: 1400, 1600, 1900, 1920, 1966, 1991, etc. I love when established systems break down and new idioms struggle to be born. The moment the rules stop working is the moment my ears perk up.

Here’s a video of Joe demonstrating his digital guitar playing: