James McAlister is a drummer, producer, multi-instrumentalist recently on tour with Sufjan Stevens. We caught up with James at the end of Sufjan Stevens’ tour in support of the new release, Carrie & Lowell, to talk about his musical projects and time on the road. 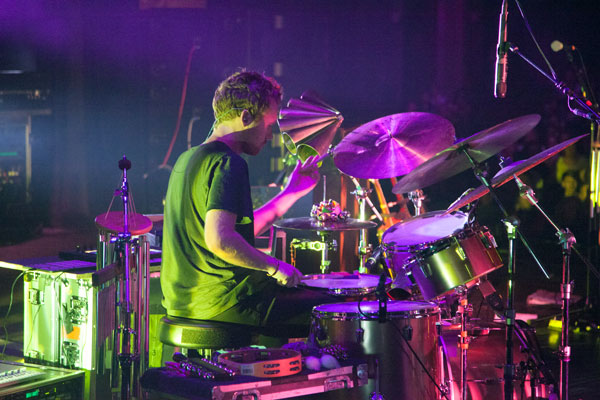 Drums and percussion are my primary instrument, but I also spend a lot of time in the studio as a producer, composer, and multi instrumentalist. Currently I am living in Los Angeles and have an amazing wife and 2 amazing children.

What was your role on the Carrie & Lowell Tour? What was in your touring rig?

For the Carrie & Lowell tour, I came in to add some rhythmic support as well as textural stuff to the new songs. I wasn’t around for the record, so I was able to add a fresh approach specifically for what Sufjan wanted to present at the live show. At first I think the idea was to basically just play some synths and a little percussion, but in rehearsals we ended up going a little crazy stretching out the dynamic range of everything.

My touring rig ended up being a sort of basic drum kit (built by my friends at C&C drums), with a few tonal additions including some tuned percussion by Pete Engelhart. We also developed some semi-tuned “bongo toms” that were really useful. The electronic side of my rig was Ableton with their Push controller as well as the QuNexus and QuNeo. The Push is really nice as a global controller – but I loved having the QuNexus and QuNeo as dedicated synths for each song. Casey Foubert and I geeked out for a few days on the QuNeo – he ended up building me a really cool preset where I could play 4-note chords with each pad as well as some melodic stuff. I added some filter and delay control via the rotary encoders. It is extremely musical and easy to make a lot of sound quickly.

Any exciting stories from being on the road with Sufjan?

Getting to play great music with my friends is such a gift – I never take any show for granted.

Do you have any tour essentials? Superstitions?

Can you tell us a bit about your project with Jimmy LaValle from The Album Leaf?

Jimmy and I have been friends for a long time, since 2002 or before maybe. We’ve always talked about doing some music together and finally this year we started working on a few things. He also invited me to mix a couple of songs from the upcoming Album Leaf record, which was really fun. I’m not sure what the timeline is on our project, we are both dads so finding extra time to collaborate has been difficult! But we are both really stoked on the tracks we have so far.