George Mattson is a pioneer of synthesizer design, the inventor of the Syntar (the first ‘keytar’) and the guy behind Mattson Modular Systems.  We caught up with George to talk about his views on the history of synthesis from analog to digital and back, the invention of the Syntar, and the process and inspiration of building custom modular rigs.

My name is George Mattson. I do a lot of things. But, I’m going to take it from the concept of this interview that I should say that I design and manufacture musical synthesizers and circuits. 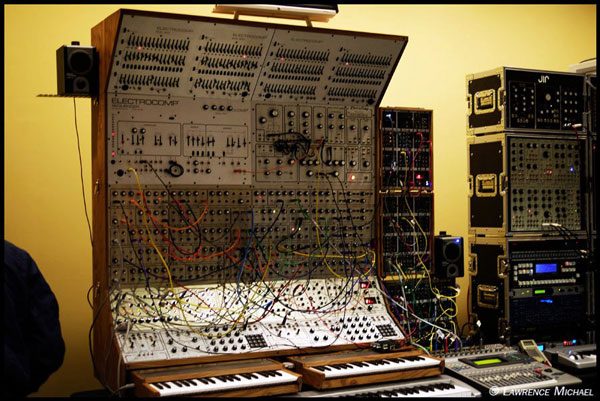 The Mattson EML at Synthfest

You’ve seen the demise and resurgence of analog synthesizers and modular systems, do you think we’ve learned from that experience?

I don’t think we’ve ‘learned’ anything new. We have been able to take advantage of the advancements in technology over the past three decades and utilize that to provide better and more flexible systems to the current market.

What I experienced at the ‘demise’ is that the digital systems were capable of providing synthesizer customers with saved patches, better stability, polyphony and less consumer cost. Those were the demands the customers made to the manufacturers and they were provided for by the digital manufacturers.

The sonically creative capabilities, available with modular synthesizers was lost to the digital generation. But, the digital realm provided a unique sonic palette on their own. For a long time, you could tell what instrument an artist was using on a project because they just used stock patches. Very rarely did they modify a patch.

The ‘resurgence’ occurred because the customers who were born and raised in the digital age realized that modular synthesizers of the past had relatively infinite sonic possibilities beyond what some engineer decided they could access through a single parameter control after scrolling through pages of menus. Modular systems allowed for changing multiple sonic parameters in real time. The desire to create and craft their own sound identity brought the focus back to modular systems. As demand grew, more people became involved with manufacturing. The modules available now reflect the versatility and enthusiasm of the new generation utilizing modern technology. 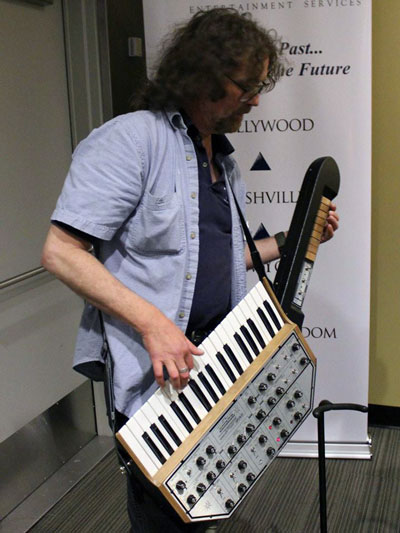 George Mattson and the Syntar

You’re the brain that came up with the concept of the Keytar and built the earliest model, the Syntar synthesizer. Where did that idea come from? Would you ever consider reissuing the Syntar?

The story is well documented. I was alone in my studio and couldn’t reach between the synthesizer panels and the keyboards. The idea of a self-contained synthesizer that can be carried around the stage just came to me. Adding a neck with controllers seemed to be a logical addition. The information for how to do it just poured into my brain. I have no idea where the data dump came from. I just started writing it all down before the information stream stopped. It took a month. It was quite invigorating.
What I discovered was that when you have a concept with a very vivid, clear image of what it is and what can be done with it, people around you start to tear it apart, ask who you think you are, what makes you think you could do it, etc. Once you have a new idea, very few people will support the concept. Most people who know you will try to convince you to abandon the idea.

They don’t have the vision and will probably never “get it”. I chose to not listen to them and continue because they weren’t ‘me’ and didn’t have the vision I had. Basically, you have to keep your enthusiasm and avoid the negativity. There’s a lot of it. You just have to shrug it off and continue to move forward. Otherwise, you’ll never accomplish anything. Eventually, you’ll start running into people who actually are positive about the efforts. That’s always a relief.

I have considered reissuing the Syntar. It would be designed for the existing time frame utilizing current technology. However, it would require a large capital investment. I have considered my original goal: Find an established manufacturer that would take on the project and hire me as the project organizer/ team leader.

Basically, the Syntar exists today in the modular world as the Mattson Mini Modular circuits as well as the various brands I have licensed my designs to for manufacture in the Eurorack format.

After the Syntar saga you were a touring keyboard tech for Jefferson Starship, do you have any fun stories to share from your time on the road with them?
I have many of them. But, it would require a separate posting.

Basically, despite the general image of parties, babes and pranks; road work is a lot of work. You’re on call 24/7, you can’t call in sick on the road. You do your job. Flu or not. The show MUST go on and a lot of people paid a good sum of money to be entertained. You entertain them.

Having said that, I had a blast!

Tell me about Ichabod, the monster modular synthesizer you made for Billy Corgan. What was the conversation like? How did you two come up with the final design for the system?
Billy [Corgan] had seen a YouTube video of the first 8 production Mattson Mini Modular systems stacked on top of each other. Redmartian had taken a classical lute piece and recorded it utilizing his system (bottom-right two cabinets) https://www.youtube.com/watch?v=xQJXcJ8T96g

Billy liked what he heard (and saw) and sent me an introductory email stating that he liked the way it sounds and asked if I’d be willing to custom build a large modular system for him. Basically, Ichabod was eight 2-cabinet Mattson systems put together like it is in the video with the two upper corners filled with two cable caddy cabinets for patch cable storage. 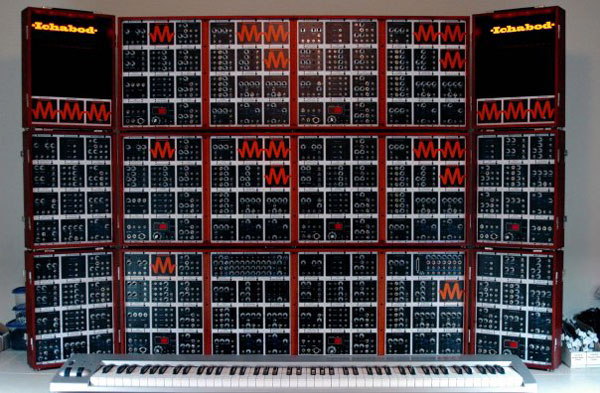 Ichabod, made by Mattson Mini Modular for Billy Corgan

I build custom systems based on how the customer will utilize it. After we decided on the form factor, I asked him what his intended purpose was; Studio use where it will rarely be moved, medium relocating or heavy road use.
The cabinets, materials and construction are based entirely on the proposed function. Since Ichabod was to be utilized primarily in a studio environment, I designed it as functional furniture. I chose the wood (African Padauk) because I thought Orange with black fit the Pumpkin theme… Billy asked if I could get the orange blank panels manufactured, I said I could and all he had left to do was determine what modules he wanted to fill 192 module spaces with… I designed and built the entire system in three months. Then, I had the opportunity to “bench test” it for two months before I delivered it. I had serious withdrawals after delivery. After having that many modules available, going back to a smaller system felt limiting…

I love building custom systems. They’re always different, they fit the needs of the customer and I can add client-specific touches that make it fun to build and personalized for the customer.

You put a lot of craft and care into your cases with a wonderful attention to detail. What’s the inspiration for adding these unique touches and what do you think they add to the instrument’s character?

The short, honest answer is: I like them to look pretty…

I lived around architects in my younger days in Alaska. Their design philosophy is to define the function of the space, then, design the shell around that. I utilize the same philosophy when I design a custom system for a customer.

I think a system that a customer pays me to construct should be well built, designed for the intended purpose and be constructed so that they’re proud to show it off. It doesn’t take much more effort to ensure that wood grain matches or that I take more time to sand the wood three more grit sizes down from what most people do. That’s my personal preference. The hard part is staring at the raw materials and piecing them together mentally before I cut anything. I don’t have jigs for custom systems so, a lot of the time is just staring at it and deciding the best route to go to make it awesome while keeping within the design parameters. The materials on hand will determine the final outcome.

How did MST, your partnership with Synthrotek, come about? Do you find the climate of synth inventors to be different today than in the early years?
I have no legal partnership with Synthrotek. They did, however, license a large number of my circuits. Once the NDA and licensing agreements are signed, I submit the schematics and my obligations are over. With Synthrotek, they wished to actually use my name behind the designs. The other manufacturers that I have licensed circuits to have chosen to be discreet about it.

Steve Harmon of Synthrotek called me out of the blue about a year ago and proposed that he license enough of my circuits to be able to manufacture a higher end, full mono-voice system.
After I returned from back east, he came up from Portland and we discussed the proposal. We came up with a list of circuits he wanted to manufacture, what specific functions/features he wished to have/not have over the core circuits, discussed his marketing plans and off we went.
The next month he returned (on my 60th birthday), we completed all of the paperwork and I submitted the schematics over the next three months. The final circuit of the original list, the MST VCO was just released to the market. That completes the entire mono-voice line concept.

Since Synthrotek is relatively close, they have hired me on occasion to do engineering on some other projects, come down and help them with module builds when they’re in a pinch and give manufacturing classes and philosophies to the employees. Basically, the entire operation has become a second family.

They’re a lot of fun and a good group of people.

What’s been inspiring you lately?
My customers inspire me. I listen to what they want, mold it into something resembling reality and go from there. I just spent three months building that Synthrotek MST/ Division 6, 9Ux150HP system for Craig Padilla. That was a fun project. Craig received what he was looking for and I added a few tricks with some hand-built circuits to allow him to do the majority of his music style live in real-time. I just sorta do that. Most of my customers have become really good friends. 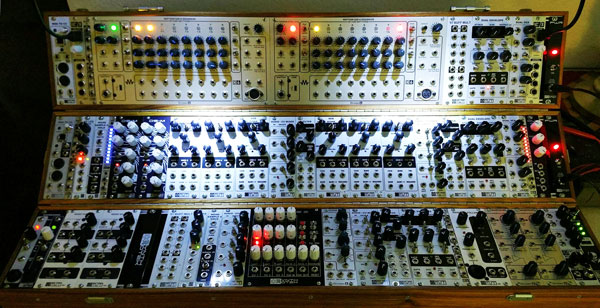 Anything else you’d like to talk about? Any projects coming up?
Now that the Craig Padilla system has been completed, I have three more additional designs to develop and submit to Synthrotek. Plus, Steve saw my hand-built ribbon controller module and wants to license that. So, I’ll be busy for a while.
An additional submittal that Synthrotek commissioned was my expression pedal interface module. Rumor has it that they will be releasing that module soon now that the VCO has been released.

I believe that they’re going to release the MST MIDI/CV module first that they had my little brother, Scott Rise of Division 6, design for them.

Here are some links to George’s projects:

Check out this video with George Mattson and Synthrotek on the history of analog and modular synths: