Eddie Ojeda is the lead guitarist in arguably the hardest working, hardest rocking band of all time: Twisted Sister. 40 years at the mast of an outfit like that imbues one with a particular brand of wisdom and panache, and Eddie was gracious enough to answer some questions about the band, his rig, his mobster sobriquet and his very own brand of cherry habanero hot pepper sauce. Yeah! 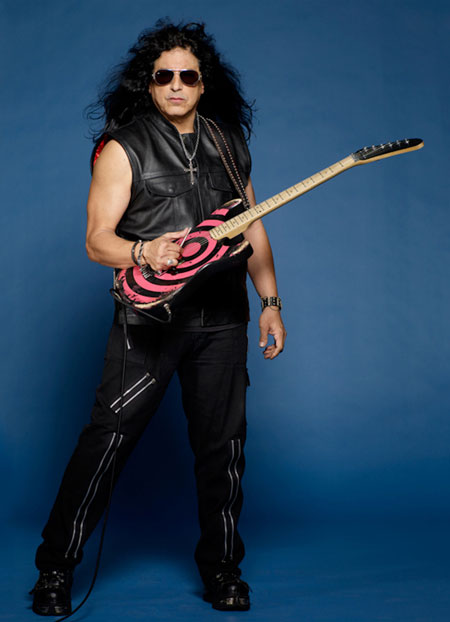 For starters, can you tell us who you are and what you do?
My name is Eddie Ojeda and I am a solo artist and the lead guitarist for Twisted Sister for 39 years. I know it’s a dirty job but somebody’s got to do it.

I’m curious, how did you get the nickname “Fingers”?
There are a few different explanations for that question. The way it happened was at a live show in Brewster, NY back in the wonderful colorful 80’s. I had cut my main playing finger (ring finger) earlier in the day cutting open a bagel just before I went to the gig. I had wrapped my finger with a bandage and had to play the night like that. Needless to say that the bandage did not last too long and I was bleeding all over the guitar neck for the remainder of the set. When we got off stage Dee saw my finger and hand all full of blood and just called me Fingers. The nickname just stuck ever since. It’s a fun play on the gangster names we all know, like Charlie Lucky Luciano or Jimmy Knuckles.

Can you give us a quick rundown of your touring rig? Has it changed much since you started with the band?
My touring rig has changed most recently in the past 8 years. In the early days we just used 100 watt Marshall Heads with various stomp boxes for our effects. That’s all there was available in the late 70’s. Over the years we started using all kinds of rack gear like the Lexicon and T.C. Electronics with custom controls for stomps. It was all about having a rack the size of a pinball machine even if you didn’t use half of it. When we toured with different bands we would all show each other our different gear. It was like showing off a new car. The rack stuff was better quality but you could still get the same sounds with regular, good-old stomp boxes. Looking back it never really made much of a difference, but it made you feel better I guess. Now we are using the Kemper power racks with 2 Quilter 200 Watt Tone Blocks for the extra cabs and the KMI Soft Step 2 as my foot controller. It’s a great lightweight controller. I have one of the buttons set as a wah wah pedal so I don’t have to bring an expression pedal anymore. The Kemper has every effect and sound I need so these days one rack unit can do the job of six.

Do you have any tour essentials for when you’re out on the road?
For now I just bring my 2 bulls-eye guitars (and yes I was the first person to ever have a bulls eye guitar in the world and that’s a fact, Jack). My main Pink and Black and my Black on Black.
They both have DiMarzio Bridge pickups on them. The P+B has a D Activator Bridge and the B+B has an Evolution Bridge on it. Both guitars have Sustainaic pups in the neck pos and both guitars have Floyd Rose and Floyd Upgrade parts and bridges on them. We use three 4×12 Marshall bottoms each. One 4×12 is on stage left for each of us.

Twisted Sister built a fan-base large enough to sell out The Palladium in New York without the help of a recording contract or radio play. And that was before the internet! How did you achieve such a large and enthusiastic following?
From the beginning we started playing clubs all over the tri-state area we started building a following. Within a year and a half we were packing out all the clubs within a 100 mile radius. Mostly in New Jersey, Connecticut and New York. The places we played got bigger and bigger we would get up to 5000 people at the Fountain Casino in New Jersey on a Wednesday night as well as any other large club all over the tri-state area. This allowed us to not have to get regular jobs and play music for a living. We finally got the record deal we deserved after many years of hard work and the rest is history, which is well documented in a movie by director Andy Horn that’s coming out soon called TWISTED F##KING SISTER (what else).

What’s been inspiring you lately?
I have a hot sauce called Eddie Ojeda’s Cherry Habanero Hot Sauce that I released in April 2013 that I did mainly because I have a certain love for hot sauces and because there was no cherry hot sauces available on the market. I like to eat egg whites in the morning, which are very bland but by adding some hot sauce on them they become rather awesome in flavor. So out of necessity comes invention. Myself and with the help of my Chef Friend John Rizzotti we created my Cherry Habanero Hot Sauce. It’s done very well so far so I am adding 2 more flavors to the line. An Apple Serrano Mild Hot Sauce and a Peach Carolina Reaper, which is the hottest of the 3 sauces. I am doing a new launch at the end of July 2015 for all 3 sauces. I am also working with my daughter, who is a pop singer and living in L.A. perusing her singing career. I plan on releasing some more of my solo music in singles in the near future as well.

Here’s the trailer for the documentary We Are Twisted F*cking Sister.