DeWayne Blackbyrd McKnight is an electric guitarist and funk practitioner who has shared the stage and studio with legends the likes of Herbie Hancock and the Headhunters, George Clinton’s Parliament Funkadelic, Miles Davis and The Red Hot Chili Peppers. I caught up with Blackbyrd after a stint on the road with the P-Funk Allstars to talk about his life in music, being in the studio with George Clinton, and the current State of the Funk (spoiler: the Funk is just fine.) 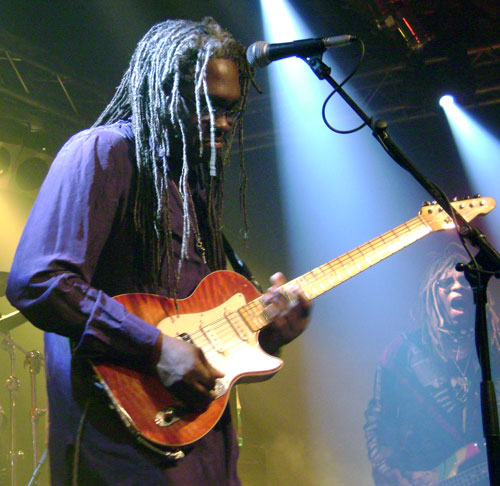 For starters, can you tell us who you are and a bit about what you do?

I am DeWayne S. McKnight, also known as Blackbyrd McKnight. An American-born guitarist from Los Angeles Calif. I have roots in funk, rock and jazz fusion genres of music. My list of accomplishments so far include playing with Charles Lloyd, The Sylvers, Herbie Hancock/The Headhunters, Sonny Rollins, Miles Davis, Red Hot Chile Peppers, George Clinton & Parliament/Funkadelic, Brides of Funkenstein, Bootsy Collins Funk Unity Band, Socialybrium, Miles Electric Band, and Shuggie Otis to date. My earliest musical experiences include touring with The Charles Lloyd Quartet from the early 70’s Herbie Hancock mid 70’s Brides/P-Funk late 70’s which is where I stayed from 1978 till 2008. During this era I performed briefly with Red Hot Chile Peppers and Miles Davis. I’ve since returned to P-Funk tour this year, 2015, which brings us to the present. There is a lot more info on Wikipedia for those inquiring minds.

You joined The Headhunters at a pivotal time as the first guitarist in the band on their first album without Herbie Hancock performing. How did you get on that gig?

In early 70’s I was touring with jazz saxophonist Charles Lloyd. Our tour took us to Kansas City where we were booked in the same hotel as Herbie Hancock who was then touring with his sextet band. I needed a cab to go into town. When I got to the lobby I was met by the clerk who said another gentleman also needed a ride to town and asked if I wouldn’t mind sharing the ride. That Gentleman was Bennie Maupin. I already knew who he was and was quite a fan and excited to meet him as I was listening to a lot of Headhunters at the time. We introduced ourselves and had a great musical conversation on the way to town. As we parted company he said to me “I’ve got the feeling we will play together someday”, so we kept in contact. That was my initial contact with Herbie’s camp. Afterwards I’d go up to Bennie’s house and work on some musical compositions he was working on. This went on for a good while until I got the call to go to Oakland for a jam with Paul Jackson, Mike Clark, Bill Summers, Bennie (Herbie’s new group) and myself, not knowing they were looking for a guitarist for a new group. So I got to Oakland and we jammed at Paul’s house. That was mad fun!!!!!!!!! I still have the tape somewhere. In fact it went so well they asked me if I’d like to be a part of the new band Herbie was producing called “The Headhunters”. That is how that all went down.

How did you meet George Clinton and start playing in P-Funk?

I met George Clinton through Ron Brembry (Brem), a friend and fellow guitarist who helped me keep my chops up in-between gigs. Brem introduced me Archie Ivy the President of Thang Incorporated which was headquarters for all the George Clinton groups. Brem and Archie (who plays bass) are also frat brothers and played in a band together. I was invited to go to Archie’s house and jam one day- MAD FUN! Afterwards, Archie told me about a new band they (the Clinton Camp) were working on and to be ready to audition when the time comes. About a year and some change later I got a call from the Thang Incorporated office telling me I had a flight booked to go to Detroit for an audition. I didn’t know what band it was or anything, but if it had anything to do with the funk I was in. So I got to Detroit, went to the audition and met the cast of characters. The band was actually The Rubber Band without Bootsy & Catfish. Kush Griffith was the band director, he was great. Jeff Bunn was the bass player, musically we hit it off from the start as we did with the band and the girls. This band became known as Brides of Dr. Funkenstein. I met George later on what was called “The Anti Tour”. I remember I was coming down the stairs and George was going up. I don’t remember the words exchanged, but it was a pleasant experience . He was very upbeat and cool. That was the first meeting with George. After a year with the Brides, the band broke up but I stayed with P-Funk until February 15, 2008.

Great!!!! and that’s putting it lightly. The man is a straight up genius with music. I’ve spent countless hours in the studio with him and he never ceases to amaze me. He just seems to know what goes where, when and how, the same way he does on stage. Just a natural ring leader who knows how to make it work. He activates all the elements available to him and knows when and where to use them. He also had great engineers working with him and together they made some great music. In the studio George is the kind of guy you can watch and learn many things from. I love being in the studio with George.

What’s it like to tour the world in the P-Funk Allstars?

Touring with GC & The P-Funk Allstars is an incredible experience. With this band I’ve been to places I’ve longed to see, played some of best venues and events in the world, made MANY FRIENDS, FAMILY and FANS, etc. Not to mention played with and seen some of the greatest musicians known to man. Seen other great bands in places all over the world. And all this while I continue to do my favorite things, serve, learn and grow, and play some of the funkiest music in the world with one of the funkiest bands in the world. Sounds pretty cool to me!

Do you have any tour essentials when you’re going out on the road?

Yes I do. Everything is essential! I’m using a Framus Diablo Guitar, a laptop computer which I use for effects and the like, my SoftStep foot controller (which is one of the greatest inventions since the foot pedal), and a wireless guitar system. Thats it, nice and compact. 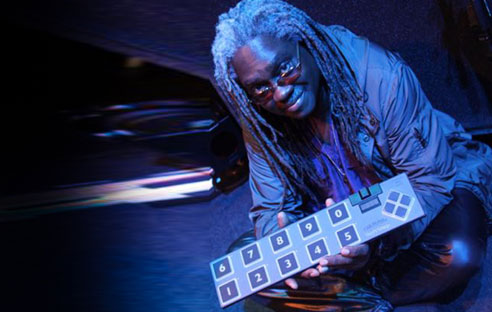 What’s the state of the funk today? Who are the artists keepin the funk alive?

Funk is alive and strong as always . Pretty much all of the bands that were doing it back then are still doing it, and there are a lot of new bands keeping funk alive these days. I like bands from all over the world, but to name a couple: Dumpstaphunk and Kendrick Lamar are just a couple of the bands I like right now. Too many to name. Seems like in one way or another everybody has their hands in the funk!!! It’s still what time it is!!!

Any advice for the maggot brains trapped in the Zone of Zero Funkativity?