Danny Barnes plays banjo and electronics, but his music defies classification; breaking down and blending genres with the finesse that only comes from a lifetime of digging into music in all it’s forms. In addition to his solo career, he has toured and worked extensively with artists ranging from Dave Matthews to Bill Frisell and set up his own label. We talked to Danny about the roles of sideman and band leader, his unique blend of bluegrass and electronic music, and his current array of projects. 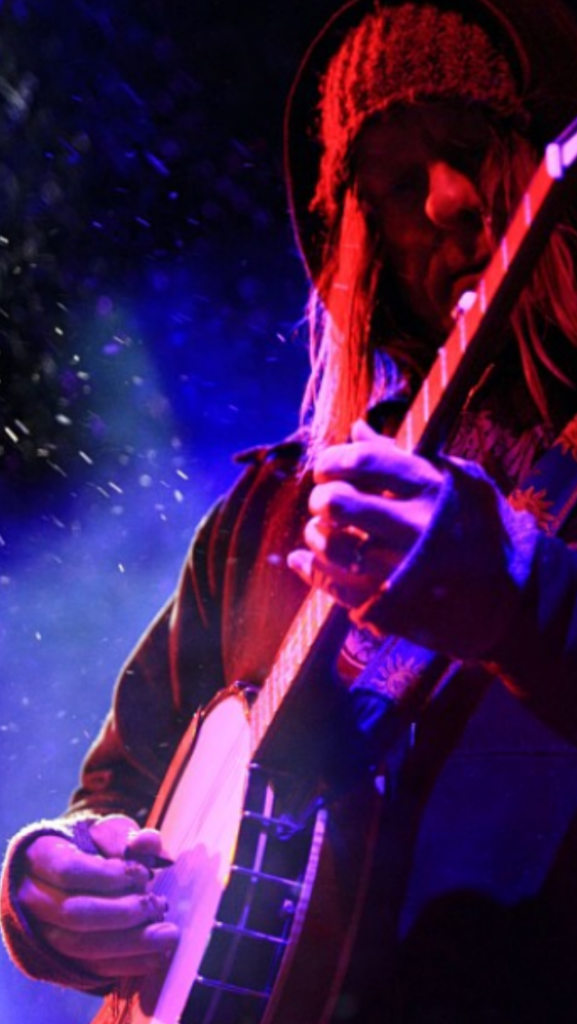 For starters, can you tell us who you are and a bit about what you do?
I’m a singer songwriter engineer producer person. I’ve been working at music for a job since the late ’80’s. I run a small avant garde label out of my house that does twisted acoustic music. Most of that stuff comes out on cassette. It’s called Minner Bucket Records. I work on other folk’s records and do tours as a side person in other people’s bands and stuff. I do a lot of touring as a solo person with a banjo and computer.

You’ve developed a sound you call Barnyard Electronics, can you tell us about that?
Well, I noticed that electronic music and bluegrass were kinda birthed at the same time. I’ve always been a fan of both things and wanted to build a style of music that is like a lo-fi amalgam of electronics, loops and contemporary recording/performance ideas with older american forms of music like blues and bluegrass and things. The goal is …..all american music at once.

What’s the creative process like when you’re writing music?
I start with little tiny ideas and then start to hook them up. When I first started writing decades ago I came up with a lot of… not very good things. Lots of bad music. So I had to throw away many ideas, but as I’ve worked on it more and more I use pretty much everything. I can take almost any idea I have and turn it into something that I like, it just might take me awhile. If you just make a little note of any musical idea or verbal phrase you come up with eventually you have lots of… monads with which to build things out of. Legos. Also, as a songwriter, I think it’s good to read novels and poetry to learn how language works. And by novels and poetry I mean the great stuff.

You’ve fronted bands, released solo music and worked as a sideman. Do you approach these roles differently?
Yes, as a sideman your job is to make the main person happy. It’s kind of like defense in basketball. All the moves are judged based on how they relate to someone else. If he’s happy and he sounds good, you are doing good. In the leader role, I suppose that’s more like offense where you are driving to the basket and everyone has to deal with you. It’s totally different, really, though each can help you understand the other. You can learn a lot by trying to have your own band, that helps you be a better side person because you know how much work it is.

What do you have planned for the near future?
Well, I’m continually working on my max patch and also building a modular synth system. I’d like to move my solo music into more an ambient soundtracky realm rather than song-based. The SoftStep is certainly a key element in my work and I use one on stage constantly. Work more on my cassette label… I always have about 20 ideas.

You’ve got a band, Test Apes, with Max Brody from Ministry, how did that come together?
One of my friends plays with the Melvins some, Jeff Pinkus from the Butthole Surfers, and he was always telling me about Max Brody. And so I went and hung with Jeff one day when the Melvins were in Seattle and got to meet Max and we’ve been fast friends ever since. He’s a really good video person and we play to videos on gigs. It’s just the two of us with a bunch of samplers and computers and shit.

What’s inspiring you these days?
I listen to a lot of electronic music and black metal. I find that metal and electronic music are very refreshing and vibrant. There’s lots of different forms and styles and stuff within those two parameters. Also I think in those two types of musics, the newer artists, the contemporary musicians, have surpassed the older masters of the forms. To me, in country and bluegrass or americana or whatever you call that stuff- the kind of music where a guy has a mandolin and suspenders and all that- they have not surpassed the masters of that form and if you want to hear the best stuff, you are better off listening to the old records. That is not so with metal and electronic music. Both of those forms keep going; new stuff, new sounds, new riffs, new recording ideas, new things, new structure. So I get a lifetime’s worth of inspiration from that. They have surpassed the older masters of the form.

Some videos of Danny Barnes in action: