Working in music technology I get to interface with many brilliant and hard working minds behind the veil of music performance. Music directors and producers, techs and engineers. Some of them have been interviewed in past posts on this blog. Recently I caught up with Daniel Rowland, the engineer/producer/tech wizard behind Adrian Belew’s seriously futuristic guitar rig and studio. We talked about his tenure with Belew, outfitting a closet with electronic toys and the process and ideas that sparked the new Flux apps.

For starters, can you tell us who you are and what it is you do?
My name is Daniel Rowland. I engineer and co-produce with Adrian Belew, build crazy Ableton guitar and performance rigs, teach studio production at Middle Tennessee State University outside of Nashville, and as an electronic musician, generally obsess over music technology.

How did you get started working with Adrian?
I saw his awesome (but large) guitar rig while assisting on his album “e”, and we began discussing how it could be made smaller. The idea was to make international touring easier, without compromising his sonic palette. Now it fits in a few small rack cases that can be checked on a plane, and we actually added features that he’s never had before. 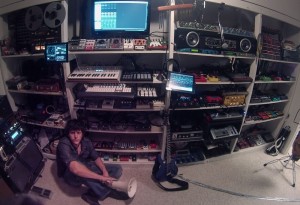 Daniel Rowland in the Magic Closet at Studio Belew

Studio Belew must be full of all the best toys, what were the considerations when designing Adrian’s rig and studio setup?
The idea for the studio was similar to the guitar system—a smaller footprint. Adrian has a 48 channel console, but wanted something that took up less space, but still sounded great. As far as toys, part of my job (and passion) is finding cool new gadgets. Not surprisingly, I basically hoard controllers and fun plugins/instruments. Adrian has been doing that for years though, which led me to build the “Magic Closet”–a room full of Adrian’s effects. It features around 100 outboard pedals, rack effects and assorted gear, all organized on shelves and wired to patchbays. As another example, I reached out to Antares and they helped us design a one-of-a-kind fretless Adrian Belew Parker Fly, featuring the Autotune For Guitar system, along with a sustaining pickup and 13 pin output. Stuff like that. Finding different ways to interface with gear, in order to get something beyond the norm. FLUX:FX is another example of that.

NOIISE released two apps this year, FLUX and FLUX:FX. What is the relationship between the two?
They represent an app strategy for the modern artist, where Adrian has an entirely new way to both create and distribute his music. And the listener has a new way to experience it.
FLUX by belew is a new music delivery system—a reinvention of the album format. Essentially, it is an album that never plays the same way twice, and is always growing and evolving, featuring an assortment of interesting visuals and tracks.

FLUX:FX is a powerful effects processor made for multitouch performance (iPad). It gives both Adrian and myself a way to create sounds that would be very difficult to make otherwise. Using a mouse, knob or slider seems very restrictive once you have a multi-touch surface to play with. It seems to me that the QuNeo and Softstep were built with that same mindset—being able to manipulate a variety of controls at one time, in a very musical, natural way.

What was the music recording and production process like for the Flux app?
Long! It took nearly 5 years, though the actual process for producing each song was fairly quick. When you’re dealing with that much music (hundreds of tracks), you don’t have time to spend tweaking the elements or mix for days on end. The result is that the focus in on Adrian’s musical ideas, and not on elaborate production.

Check out the preset Daniel made for controlling FLUX:FX with a SoftStep HERE.