Got a Girl at Great American Music Hall San Francisco

Got a Girl is the musical duo of singer (and actress) Mary Elizabeth Winstead and super producer Dan the Automator. Their debut studio album, I Love You But I Must Drive Off This Cliff Now, was released last year. The album draws heavily from 60s French pop and marries it deftly with Dan’s signature Handsome Boy Modeling School style downtempo beats. The show at Great American Music Hall in San Francisco was a fun and amazingly detailed event and an impressive showing for the band’s second-ever live performance. 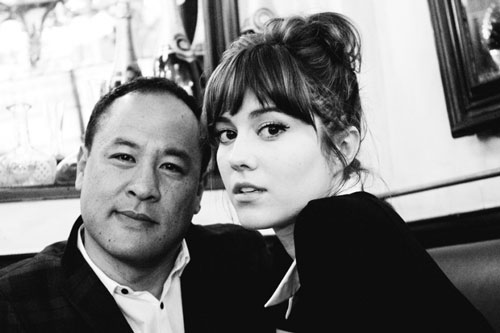 Got a Girl is Dan the Automator and Mary Elizabeth Winstead

The rhythm section- Takahiro Tozawa on guitar, Juan Alderete on bass, and Alex Swain on drums, lifted completely from the Deltron 3030 band- took the stage and warmed the audience with a sweet, electric guitar led cover of Serge Gainsbourg’s “Je t’aime moi non plus” to perfectly set the tone for the nostalgic Francophile stylings that would carry the night. Dan and Mary appeared and the show started in earnest with the album’s single, “Did We Live Too Fast”, as the song’s charming, black and white Mod themed music video rolled behind them. Ask Dan about three-eyed women sometime.

The rest of the songs from the set were accompanied by scenes cut from classic 60s cinema. The affect was sublime; the vintage film clips paired with Winstead’s sultry vocals and sinuous slink undeniable. Props to the cinephile who cut together selections from Blow-Up, The Red Balloon, Harold and Maude, Bande à part, and C’était un rendez-vous, you have exquisite taste.

Did I mention the fully stocked sake and cocktail bar onstage? Complete with bartender shaking what I believe were vodka martinis for the band? Or the big cigar Dan waved about? Or the drink that was thrown in his face? It’s always nice to see a band having a good time on stage, and, like every Dan the Automator production I’ve ever seen, the show had a healthy dose of silly antics and showmanship.

And make sure to check out the music video for “Did We Live Too Fast”: